14-year-old must be in custody: girl in Salzgitter was suffocated 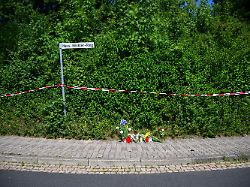 It is an act that is difficult to imagine, teenagers allegedly kill a girl of the same age. Apparently that is exactly what is happening in Salzgitter. One of the suspects is now in custody.

After the violent death of a 15-year-old in Salzgitter, a 14-year-old suspect is in custody for murder. The spokesman for the Braunschweig public prosecutor, Hans Christian Wolters, said RTL in a video interview. In addition to the 14-year-old, a 13-year-old boy is also considered a suspect.

The girl was suffocated, Wolters said: “The investigations still have to clarify how exactly the suffocation happened.” The perpetrator and the victim came from the same neighborhood and also had contact with each other. “Obviously, at least from the point of view of the perpetrators, animosity developed, and the whole thing then apparently escalated,” said Wolters.

The 13-year-old could not be prosecuted for the act because he was not yet of criminal age. The youth welfare office must now decide to what extent further measures are necessary for him, said the prosecutor. Accommodation in a closed facility would be an option. Officials discovered the body of the 15-year-old on Tuesday in a park in Salzgitter-Fredenberg. She had been missing since Sunday.