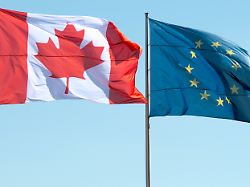 The Green election program stated that the current version of the trade agreement with Canada would not be approved. The traffic light coalition now wants to bring the agreement through the Bundestag. For this, one point in particular should be addressed again.

The SPD, Greens and FDP parliamentary groups want to get the CETA trade agreement between the EU and Canada through the Bundestag. This was announced by representatives of the three coalition factions in Berlin. To do this, however, they want to make improvements to the agreement that has already been negotiated. According to Green Party leader Katharina Dröge, this involves, for example, the regulations on investor arbitration courts, which should be “defused”. These bodies are designed to deal with complaints from investors.

CETA has been in force for the time being since September 21, 2017 – but only in those areas for which the EU alone is undoubtedly responsible and not its member states. The other parts are on hold pending ratification. In the EU, there is still no approval from twelve countries, including Germany. Canada and the EU themselves have yet to ratify CETA. That is why nothing changes immediately with the agreement between the traffic light groups.

The parliamentary state secretary in the Federal Ministry of Economics, Franziska Brantner, said: “Investment protection will focus on protection against direct expropriation and discrimination. This will allow us to rule out abuse.” Trade is important, especially with a liberal democracy like Canada, emphasized FDP parliamentary group leader Christian Dürr.

“Free trade more important than ever”

The cabinet is to pass the ratification law before the summer break, and the Bundestag is also expected to have a say soon. However, Parliament should only give its final approval once the amendments discussed have been approved by the EU and Canada, which is expected to be in the autumn.

The Greens in particular had previously had concerns, for example about a special right of corporations to take legal action provided for in the agreement. The fear was that this could be to the detriment of consumers and states. These rights have not yet come into force. In the election program, the Greens declared that they would not ratify the CETA agreement in its current version.

“For years, the FDP has wanted CETA to finally be ratified,” said Dürr, leader of the FDP parliamentary group. He referred to the Russian war in Ukraine: “Free trade with the world’s democracies is more important than ever, the free trade agreement with Canada is an important first step.”

In addition to the improvements to CETA, the traffic light factions have also agreed on a common “trade agenda”. Among other things, it provides for a commitment to “free and fair world trade” and alignment with the Paris Climate Agreement and the UN Sustainable Development Goals. Climate and labor rights should play an important role in EU trade agreements. “Sustainability is the essence of trade and not a nice thing to have,” said Brantner.