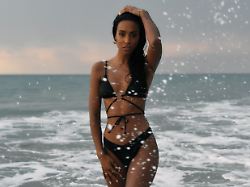 This year’s “Bachelorette” has been suffering from circular hair loss for 15 years. But this year, Sharon Battiste takes her destiny into her own hands and shaves her head. Now she shows her men an intimate side and takes off the wig.

The men in this year’s “The Bachelorette” season get to see a different side of Sharon Battiste in the third episode. So far she has only shown herself to the candidates with a wig. In an interview with RTL, she revealed that she had been suffering from circular hair loss for 15 years and showed her shaved head.

She suffered a lot from the illness, as the 30-year-old says. She has visited many doctors and often asked herself: “What’s next? What’s wrong with me? Why did I deserve this? What does my body want to tell me?” Battiste had “puzzled so much, shed so many tears, and the time was bad”. This year she finally made up her mind and asked her best friends to shave her head.

Shaved bald head was ‘the best thing I’ll ever do’

She knew this would be “the best thing I’ll ever do,” says Battiste through tears. “But during those few minutes, I don’t think I felt myself, I was scared. I was scared that I would never open up again, never fall in love again, that no one would ever find me pretty again.”

An unfounded concern: “When I looked at myself for the first time, everything was answered.” The 30-year-old is now looking forward to the moment when she takes off her wig in front of the men and shows her bald head. “The only thing that matters to me is that the man feels exactly how I feel, which is beautiful, sexy and powerful,” she emphasizes. Battiste “needs no pity or focus on this illness” because “this illness is over for me. And I would like to show him that.”

The third episode of the current season “Bachelorette” runs on June 29 at 8:15 p.m. on RTL. On RTL+ it has been available since Wednesday evening.