Big award for Seider: Young German star is NHL “Rookie of the Year” 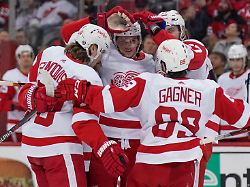 Moritz Seider has achieved what no other German ice hockey professional has ever achieved before: The defender is the best newcomer in the strongest ice hockey league in the world. The choice was clear, the statistics of the German national player are too impressive.

National ice hockey player Moritz Seider is the first German to be voted the best newcomer in an NHL season. The 21-year-old from the Detroit Red Wings was overwhelmingly awarded the Calder Memorial Trophy for tremendous performance in his freshman year in the National Hockey League. Only 25 of the 195 voting journalists did not see him in first place. Second place went to Trevor Zegras of the Anaheim Ducks.

Seider had 50 points as a defender and had 43 assists, more than any other NHL rookie last season. The man from the Palatinate, who was trained at Adler Mannheim, was also on the ice in all 82 games of the season and played more minutes than any other rookie. Detroit finished 6th in the Atlantic Division last season, missing the playoffs for the sixth year in a row.

At the gala in Tampa, Seider thanked those who supported his career and made a little joke about his absent parents, “who just came back from Croatia and thought it was more important to go on vacation”. And the national player also reminded of the developed ice hockey location Germany: “It’s cool, it’s great,” said Seider. “I think more and more good players and great people are coming from Germany. I think not only Hockeytown is excited, I think I speak for all German fans. We play at the World Cup every year and prove to people that they wrong, and we’ll keep getting better.”

The award was quickly recognized at home: “We are very proud that Moritz Seider was the first German to receive the Calder Trophy at the age of 21,” announced Dr. Peter Merten, President of the German Ice Hockey Federation. “His talent, great ambition and support from German ice hockey have made him one of the best defenders in the world and an outstanding player.” DEB sports director Christian Künast also paid tribute to Seider: “Despite his young age, Moritz Seider has already become a great personality,” said the former national player. “He’s a player who shapes every game and can give a face to every team in the world.”

The NHL once again reported on the impressive numbers of the Rookie of the Year: “Seider was in fourth place with 50 points (seven goals, 43 assists) as a defender, just behind the rookie Michael Bunting with the most points. He scored 21 of these points ( two goals, 19 assists) on the power play, most among rookies, and had four game-winning goals that put him second among rookies. Seider topped that list, averaging 23 in 82 games this season: 02 minutes per game on the ice.”

The journalists’ most valuable player of the season award went to Auston Matthews of the Toronto Maple Leafs. The attacker scored 60 goals and was also voted the NHLPA Players Union’s Pro of the Season. Matthews beat Edmonton Oilers’ Connor McDavid, who won the MVP award a year ago for the second time in his career. Leon Draisaitl took ninth place in the vote. He was the first German to win the Hart Memorial Trophy for MVP two years ago.