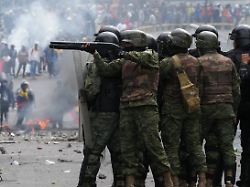 Indigenous peoples in Ecuador have been protesting for nine days against high fuel prices and mining concessions being awarded to their areas. Again and again the demonstrations turn into violence. In addition to many injuries, there is now another death to mourn.

One person has been killed during protests by thousands of indigenous people against the government in Ecuador. A Quechua member was “apparently hit in the face by a tear gas bomb” in the village of Puyo on Tuesday, said lawyer Lina María Espinosa from the Alliance of Human Rights Organizations. The protests, especially against the high fuel prices, have been going on for nine days.

In the capital Quito in particular, there were violent clashes with the police during the demonstrations on Tuesday. The security forces used tear gas and water cannons. On Monday night, a man was killed when he fell into a ravine during the protests. The public prosecutor’s office initiated investigations on suspicion of a homicide.

The indigenous organization Conaie called for the protests. She calls for a reduction in the price of fuel and also for a discussion on current price controls on agricultural products at the expense of farmers and on mining concessions awarded in indigenous areas.

President Guillermo Lasso has declared a state of emergency for several provinces because of the ongoing unrest. On Tuesday, he tweeted that the government was ready for an “open and respectful dialogue with Conaie and other civil organizations.” Conaie boss Leonidas Iza set conditions for a dialogue with the authorities on Tuesday evening. He called for an end to “repressive measures”, the lifting of the state of emergency and the withdrawal of the military from a park in Quito where indigenous people usually gather.

According to official figures, 101 security forces have been injured since the protests began. The Alliance of Human Rights Organizations also reported at least 90 civilians injured and 87 arrested. The oil-producing South American country is suffering from high inflation, unemployment and poverty, and the problems have been exacerbated by the corona pandemic. Fuel prices have risen sharply since 2020.