Coach had to save: World Cup swimmer “didn’t breathe for two minutes” 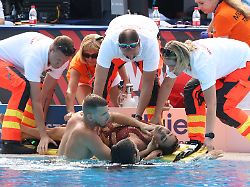 Drama about Anita Alvarez: The US synchronized swimmer faints after her freestyle and sinks motionless in the water to the bottom of the pool. Her trainer dives into the pool and saves Alvarez, whose lungs are “full of water” afterwards. Other swimmers are shocked.

Anita Alvarez’s pictures go around the world, shocking and disturbing at the same time. Completely exhausted after her freestyle World Championships, the American synchronized swimmer suddenly sinks and floats motionless towards the bottom of the pool before she is fished out of the water by her trainer in a spirited rescue operation.

“I had to jump in because the lifeguards wouldn’t do it,” Andrea Fuentes said of Wednesday’s accident. Previously, she had dived into the pool in full gear and had brought the unconscious Alvarez back to the surface: “I was scared because I saw that she was not breathing, but now she is very well,” said Fuentes. All vital functions have been checked. Heart rate, oxygen, blood sugar level, blood pressure – everything is “normal”.

The shock was still in her and her team’s limbs. In the minutes after the terrible incident, they had tearfully feared for the life of their 25-year-old teammate, who had previously passed out in competition during the 2021 Olympic qualification. “I think she didn’t breathe for at least two minutes because her lungs were full of water,” said Fuentes. Then her protégé “vomited the water, coughed, and that was it, but it was a big shock.”

“It really makes your heart stop”

The German synchronized swimmer Marlene Bojer, who had achieved her best place in the World Championships with tenth place, experienced the drama of Budapest up close. “I think that’s really bad,” said the Munich native. You’ve noticed something like this several times: “When you see it live, your heart really stops and you just think: For God’s sake.”

At the end of a freestyle, you are “absolutely at the limit in synchronized swimming. Muscular, from the head, from the energy – everything is just out there,” says Bojer: “We cover everything with the smile, the emotions and the music. But like that In a situation you can see that we are also physically at the limit and that our sport demands the highest performance from us.”

There was a similar case with the German water jumpers. In 2010, national coach Lutz Buschkow jumped into the pool for a rescue operation in Rostock after Maria Kurjo hit her head on the tower and fell unconscious into the water.

The incident from twelve years ago went off lightly – similar to that with Alvarez. “Tomorrow she will rest all day and decide with the doctor whether she can swim freely in the team final or not,” said Fuentes, thanking “for all the good wishes for Anita”.