Colourful, shimmering plumage: the secret of the hummingbird’s colors has been revealed 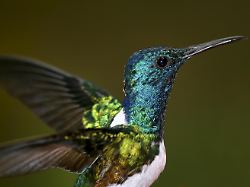 Hummingbirds have an anatomical peculiarity that leads to the iridescent colors of their plumage. After a detailed analysis of the birds, researchers can now say exactly what that is.

The plumage of birds covers a much larger spectrum of colors than previously known. This is proven by analyzes of the feathers of more than 100 hummingbird species. According to this, the majority of the colors of these birds is not – as is often the case – due to special color pigments such as melanin, but to light effects that are primarily based on the fine structure of the plumage. This creates the for many hummingbirds (Trochilidae) typical iridescent coloring, which also depends on the angle of incidence of the light.

Colors have diverse functions in animals ranging from thermoregulation to communication, writes the team led by Richard Prum from Yale University in the journal “Communications Biology”. Birds are therefore among the animals with the largest color spectrum. This is probably also due to the fact that their retina contains four types of cone cells – one more than in humans: In addition to the cones for short, medium and long wavelengths, they also have a group of photoreceptors for violet and ultraviolet light.

Prum already had 2011 in the journal “Behavioural Ecology” described the color spectrum of bird feathers after analyzing 111 species from different families. His team has now examined the plumage of 114 hummingbird species from 68 genera. This corresponds to about a third of the species of this bird family, which only lives in America.

“Hummingbirds expand the known spectrum of bird feathers and cover color ranges that were previously undocumented,” the team writes, pointing in particular to intense greens and blues. Overall, the color spectrum of the examined hummingbirds covered around 85 percent of the entire range known from birds.

This is less due to the colors formed by pigments such as melanin, but mainly to the so-called structural colors. These are caused by interference – i.e. superimposition of different light waves – and are based on the interaction of several factors in the birds. These include the fine structure of the interlocking feathers and the different layers of special organelles formed in pigment cells – the so-called melanosomes.

The team emphasizes that this is the most versatile mechanism for coloring and is particularly complex in hummingbirds. “Not only are hummingbirds an extremely colorful family, but they also contain the nine most colorfully colored bird species known,” it continues. These include, in particular, the hyacinth hummingbird that lives in South America (Boissonneaua jardini).

In general, the coloring of hummingbirds is usually particularly pronounced on the head and throat, which are very important for the communication of the birds and which shimmer brilliantly when the head is turned towards a viewer.

The researchers also explain why the blaze of color is so pronounced in hummingbirds in particular: this is related, among other things, to the number of species and the age of the bird family. “Hummingbirds excel in these criteria,” it says. “The 336 present-day hummingbird species have spread rapidly over the past 22 million years.” In the course of this time, the variety of colors has become more and more pronounced through selection.