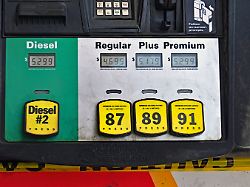 US gas pump prices have soared to new record highs since the Russian war of aggression. In order to relieve families, US President Biden wants to suspend taxes on gasoline and diesel for three months. 10 billion dollars went to the Treasury with it. Critics do not believe in a large effect.

In view of the sharp rise in fuel prices in the USA, President Joe Biden wants to ask Congress to suspend the nationwide tax on gasoline and diesel for three months. Biden understands that high gas prices are a “significant challenge” for American families, the White House said. That’s why he will ask Congress today to suspend the tax from July to September. The states should also suspend their taxes, it said. These are often higher than the state ones.

The federal tax is 18.4 US cents per gallon on gasoline and 24.4 cents per gallon on diesel. The national average price of gasoline is currently around $5 per gallon. At the beginning of the year, before the Russian war of aggression against Ukraine, the price was just over $3 a gallon. States charge an average of about 30 cents in tax per gallon at the pump. The White House said that if states join in suspending the gas tax and oil companies and refiners do their part, the price could be reduced by as much as $1 per gallon. The suspension of the nationwide tax would therefore lead to a loss of revenue of around 10 billion dollars. The Office of the President assumes that it will be able to compensate for this loss of income.

Some states, like New York and Connecticut, have already suspended state fuel taxes, while others have explored ideas like consumer rebates and direct relief.

Opponents of the proposal criticize that the suspension of the tax only has a limited effect and often only partially reaches consumers. House Speaker Nancy Pelosi fears oil companies and retailers will pocket most of the savings. “Federal gasoline tax suspension alone will not solve the problem we face,” admitted a second senior government official. “But it will give families some leeway while we continue to work to bring prices down over the long term.”

Biden is under a lot of pressure due to the persistently high inflation rate and, in particular, the historically high fuel prices by US standards. Its Democrats want to defend their slim majority in both houses of parliament in the congressional elections in November.