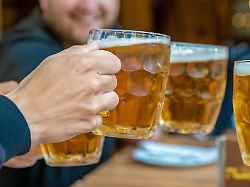 People are thirsty again, and more beer is being consumed for the first time since the start of the coronavirus pandemic. Production is increasing again – and the brewers have new worries. The reason is the gas supply of their companies and their suppliers.

Many beer makers are concerned about the gas supply for both their company and their key suppliers, such as glass makers. “The industry is deeply concerned about a blackout,” said the managing director of the German Brewers’ Association, Holger Eichele. According to the association, about two thirds of German breweries are dependent on gas. “We drive through a wall of smoke at high speed. We lack planning security,” says Eichele. This applies to both the pandemic and the energy supply.

“The brewing industry has a sword of Damocles: It’s a gas embargo,” said the chief representative of the Veltins private brewery, Michael Huber. If that were to happen, “many breweries will have serious problems.” A large part of them is hardly able to switch to other energy sources such as oil.

In addition, the gas supply is also a main issue for the brewers’ important upstream suppliers. “We need about 50 to 60 million new bottles a year. If something breaks down, the supply is totally interrupted,” said Huber, referring to the glass manufacturers.

A lack of glue or a lack of labels could also bring production to a standstill. That is why Veltins bought goods ahead of time for 30 million euros that would otherwise have been ordered at short notice. Warehouses are rented for these quantities. “You need liquidity and staying power and, above all, you need capacity,” said Huber. The brewery in the Hochsauerland district is prepared for a possible switch from gas to oil and has tank capacity for five weeks’ oil needs. The brewery would need the equivalent of three large tankers of oil per week.

Actually, after a deep trough, the brewers have just started to pick up again. Full beer gardens and folk festivals had boosted consumption again after the corona pandemic. Now there are new worries.