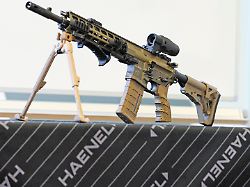 First, weapons manufacturer Haenel was awarded the contract to procure new assault rifles for the German armed forces. Due to a patent infringement, however, the order was withdrawn and given to the competitor Heckler & Koch. A dispute in court is now finally ending: Haenel has to admit defeat.

The Thuringian arms manufacturer CG Haenel has failed in its appeal against an award procedure for the procurement of new assault rifles for the Bundeswehr before the Düsseldorf Higher Regional Court. Haenel was rightly excluded from the award procedure “due to serious professional misconduct” because the company had violated the patent rights of its competitor Heckler & Koch with an assault rifle, the court said. The competitor, on the other hand, did not commit any serious professional misconduct.

With Heckler & Koch’s delivery of assault rifles to Mexico between 2006 and 2009, for which senior employees were convicted of violating the Foreign Trade Act, there was such a misconduct. In this case, however, the maximum limitation period had already expired, the court explained.

Both companies had submitted offers in a Europe-wide tendering process for the procurement of new assault rifles. First, Haenel was awarded the contract. In March 2021, however, the Federal Ministry of Defense informed the weapons manufacturer that it was excluding the company from the process due to patent infringement and awarding the contract to Heckler & Koch instead.

With a so-called review application, Haenel failed before the public procurement chamber of the Federal Cartel Office. The Higher Regional Court has now confirmed this decision. The decision is final. The Federal Patent Court in Munich is currently dealing with another procedure in the dispute because Haenel considers the disputed patent to be invalid.