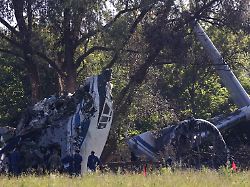 The occupants of an “Ilyushin Il-76” transport aircraft found problems with the engine and wanted to land. But 200 kilometers southeast of Moscow, the machine crashes on the ground. Four people die and others are injured.

“According to initial information, four people died in a plane crash near the Mikhailvosky highway in the city of Riasan,” the regional crisis management team said in a statement, according to TASS. The crew noticed a problem with the engine and wanted to land, the Ministry of Defense said in a statement.

When it hit the ground, the machine partially shattered. The five injured were taken to the hospital. The aircraft was an Ilyushin Il-76 transport aircraft.