Energy-saving premium ?: Habeck: “You won’t get it, old man” 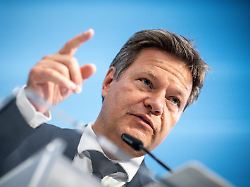 Energy Saving Bonus?
Habeck: “You won’t get it, old man”

It cannot be ruled out that Russia will turn off the gas tap completely, said Federal Minister of Economics Habeck. Therefore, every private person is required to save energy. In an interview with the ZDF “heute-journal” he responded to the question about a bonus with a flippant answer.

Federal Economics Minister Robert Habeck has again called on consumers to save gas. In an interview with the ZDF “heute-journal”, the Greens politician made it clear that he does not consider a complete gas stop scenario from Russia to be impossible: “I would be lying if I said I would rule it out.” Habeck made a similar statement in the RTL night journal.

In addition to the efforts of politicians, everyone should also see for themselves where they can save gas, even if a small measure initially seems ridiculous. According to Habeck, up to 15 percent could be saved if the gas heaters were checked, for example. The rule of thumb is that for every degree less, you save five percent of energy, he clarified. “It always sounds so banal, Energy and Climate Minister Habeck says, ‘Replace the shower head, that saves 30 percent energy. Hahaha, a shower head should save us from Putin’,” said Habeck with a sarcastic undertone. “But if you see the total, it adds up quite a bit.” After all, there are a total of 40 million households in Germany.

Every effort is a question of solidarity, according to the minister. He didn’t like a bonus as an incentive: “I don’t want to live in a country where you only move if there’s money for it,” said Habeck, explaining that it’s about overcoming your own weaker self. Then he went one step further and said with a slight smile: “If someone says, ‘I’ll only help if I get another 50 euros’, then I would say: ‘You won’t get it, dude.'” The sharply rising prices should be enough incentive to want to save as much as possible in private households.

Putin must not win

As Economics Minister, it is his duty to ensure the energy supply and to use coal-fired power plants for this purpose, stressed Habeck. As a Greens politician and climate protection minister, that hurts him, but it doesn’t help: “Because we are simply in a gas emergency.” The expansion of renewable energies is important in order to make Germany independent of gas, but this is still not enough.

If Russia decides to turn off the gas tap completely in order to put pressure on the market, Habeck wants to make sure that Putin “does not win,” the minister said. Putin’s main concern is to stir up social unrest. It is therefore important to also take measures to keep society closed.

The argument of technical problems that Russia cited for the throttling of deliveries was advanced, said Habeck on RTL. It is a political measure from Moscow. “And who knows what the next political measure will be. Well, I’m not without worries.” When asked if he could imagine the gas bills trebling, Habeck said: “That can’t be ruled out (…) yes, that’s within the realm of possibility.” A price wave is coming to Germany that can no longer be averted.

Russia has reduced its gas supplies to Germany through the Baltic Sea pipeline Nord Stream 1 by about 60 percent. The federal government has therefore declared the alarm level of the gas emergency plan. The filling levels in the gas storage tanks are currently at a good 58 percent and are expected to increase to 90 percent by November.