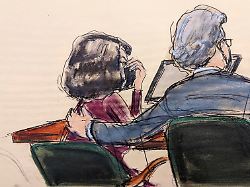 The alleged accomplice of the late sex offender Jeffrey Epstein shows a “lack of remorse”. The US Attorney’s Office accuses her of that. Because she played a central role in Epstein’s abuse of underage girls, the prosecution believes up to 55 years in prison is possible.

US prosecutors are asking for at least 30 years in prison for Ghislaine Maxwell, a longtime confidant of late sex offender Jeffrey Epstein, who is accused of aiding and abetting the sexual abuse of underage girls. The prosecution offered a possible sentence of 30 to 55 years in prison and submitted their recommendation to the judge who will preside in a federal court in New York at the sentencing hearing on June 28.

The 60-year-old Briton had previously asked for clemency. Her lawyers filed an application with the competent court on Wednesday to sentence Maxwell to less than 20 years in prison. They recounted a difficult, traumatic childhood.

According to prosecutors, Maxwell displays a “lack of remorse” for her crimes. “Rather than accepting any responsibility, the defendant is desperate to shift the blame,” wrote Damian Williams, the US Attorney for the Southern District of New York. Maxwell is an adult and has made her own decisions. “She made the decision to sexually exploit numerous underage girls.” Maxwell chose to work with Epstein as a partner in crime for years, causing great harm to vulnerable victims, he added.

Maxwell is said to have recruited young girls for years

Maxwell, the daughter of British media mogul Robert Maxwell, who died in 1991, has been in custody since her arrest in New Hampshire in the summer of 2020. During her high-profile trial, prosecutors successfully argued that Maxwell was “key” to Epstein’s strategy of sexually abusing young girls. Maxwell was found guilty of five of six counts and faces a life sentence.

Maxwell was found guilty of sex trafficking for Epstein by a New York jury in December. The former lover and then close confidante and employee of Epstein is said to have recruited young girls for the very rich and well-connected investor for years.

Epstein, who was convicted of sex crimes in 2008, was found dead in his New York jail cell in August 2019 after being arrested again. According to the authorities, the multimillionaire took his own life. Britain’s Prince Andrew was also involved in the abuse scandal. He recently settled out of court with a woman in the US who accused him of sexually abusing her when she was a minor.