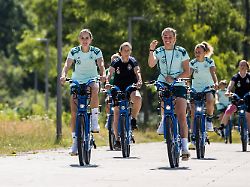 Many associations equal
DFB lets the women down financially

The Americans have enforced “equal pay” in their football association, and many associations in Europe are following suit. But the biggest lags behind, the German Football Association. Although he would pay a record premium for the European Championship, there is a huge gap.

When Bernd Neuendorf stopped by for lunch the other day, the President of the German Football Association (DFB) was served a large portion of wishes. “It was about taking women’s football in the right direction – namely upwards,” said captain Alexandra Popp of the “good exchange” between the German national team and her boss shortly before the European Championship finals (July 6th to 31st).

Whether money was also discussed at the table remained a secret. On the other hand, numerous associations have recently openly announced that they want to ensure more financial gender equality. The USA paved the way for the harmonization of premiums; in the past few days, Spain, the Netherlands and Switzerland have taken appropriate measures. Norway, England and Brazil have also taken this path.

The DFB is lagging behind. Because although the women can expect a record bonus of 60,000 euros per player in the event of the ninth European Championship triumph and the sum has increased significantly compared to the final round in 2017 (37,500 euros), there can be no question of “equal pay”. After all, every national player would have received 400,000 euros for winning a title at the last European Championship.

Oliver Bierhoff recently tried to explain why the discrepancy is so great. “The income from the tournament is very different for men than for women,” said the DFB director: “We believe that with the increase we have shown that we want to promote women’s football.”

In fact, the total prize pools for the men’s and women’s tournaments are miles apart. For example, 16 million euros will be paid out at the women’s European Championship, and 331 million euros for the men. However, this discrepancy does not prevent other associations from aligning the cash flows.

The German soccer players can ask their opponents at the European Championship test on Friday how that works. After all, the Swiss Association (SFV) has ensured that the main sponsor, Credit Suisse, will in future pay the same premiums to women as to men. The SFV itself “continues to strive for equality with its own measures”.

The success bonuses will be adjusted to 100 percent by 2024. This also applies to the bonus payments in final rounds. Compensation for commercial rights is also equated. The German internationals are following developments in Europe with great interest. “These are great signs, you can tell that there is movement,” said Sara Däbritz, but the different bonus models had to be considered “differentiated”.

Many players have to work part-time

She and her teammates are hoping for further progress at the DFB – they don’t even look at their own income. “The financial side is one thing, but first we have to create the basic structures in the league for all clubs,” said Svenja Huth. “That relates to the infrastructure – and that the players don’t have to work 40 hours a week.”

In this endeavor, the long-time leader sees the better placement of the product as the most important aspect. “Our games should be started at times when we can reach more people – and not at 4 p.m. Because the market is there,” said Huth, who is probably putting pressure on the TV stations in the interests of the DFB: “If we If these conditions are met, we can also get closer financially.”