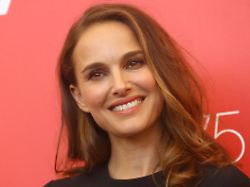 Natalie Portman begins a new phase in her career with her role as Thor’s “old ex-girlfriend” Jane Foster – at least that’s how the actress describes it herself. Now she no longer works for herself, but for her children: She wants to impress Aleph and Amalia .

In her own words, Oscar winner Natalie Portman is heavily influenced by her children when she chooses her roles. “I feel like this is the phase of my career where I’m really trying to impress my kids,” the 41-year-old told Variety magazine. Eleven-year-old Aleph and five-year-old Amalia also encouraged her to star in the new Thor movie. Both kids “were so excited about this process when they got to visit me on set and see me dressed up in a cape,” Portman explained. “That made it really cool.”

Portman said Aleph and Amalia would have preferred not to have their mother at home to shoot Thor. “It’s very rare that my children say: Please go to work!” Portman has been married to French choreographer and then Black Swan co-star Benjamin Millepied since 2012. In “Thor: Love and Thunder”, which will be shown in German cinemas from July 6, she plays Thor’s “old ex-girlfriend” Jane Foster.

The filming must have demanded a lot from the actress. She told Variety that she worked with a trainer before and during filming to get her body, especially her shoulders and arms, back into comic shape. “On ‘Black Swan,’ I was asked to make myself as small as possible,” Portman tells Variety. “Here I was asked to be as tall as possible. It’s an incredible challenge – and also a state of mind as a woman.”