FC Bayern relies on the striker: FC Barcelona increases the offer for Lewandowski 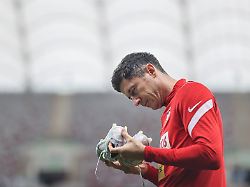 Next round in the exhausting fight for Robert Lewandowski: FC Barcelona is said to have improved its first offer for the star striker from FC Bayern. However, the offer is apparently still far from Munich’s expectations.

At a meeting on Thursday last week, the members of the economically ailing FC Barcelona cleared the way for new sources of income to be tapped. As a result of the sale of club assets, around 600 to 800 million euros should flow into the coffers in the next few weeks. The association is said to be burdened with 1.35 billion euros.

Lewandowski’s intention to change has been causing a stir for weeks. Apparently he sees no future in Munich. However, his contract runs until June 30, 2023. Club officials such as boss Oliver Kahn and sports director Hassan Salihamidžić had ruled out a transfer.

Salihamidžić firmly believes that Lewandowski will reintegrate into the team despite the turmoil. “Yes, I’m convinced he’s a professional and he has big goals in his career, so it’s fixable,” he said in an interview with Sky. Salihamidžić confirmed that he and Kahn spoke to Lewandowski and his agent Pini Zahavi in ​​Mallorca last week.

“I think we had a very good conversation,” said the 45-year-old. “It’s true, I was there. Oliver Kahn was there too, we talked, each side explained their position, but we also discussed that we don’t want to talk about the details. But it was a good conversation. ” As things stand at present, it is clear to Salihamidžić that Lewandowski will remain in Munich. “So far it’s 100 percent. July 12 is his first day at work, so I’m expecting him,” he said.