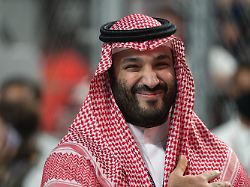 The visit of Saudi Arabia’s Crown Prince Mohammed bin Salman to Turkey is highly controversial. The murder of journalist Jamal Khashoggi on Turkish soil has left deep wounds. But Erdogan is under economic pressure – and is hoping for lucrative deals with Saudi Arabia.

Saudi Arabia’s Crown Prince Mohammed bin Salman has arrived in Turkey for his first visit since journalist Jamal Khashoggi was killed in 2018. The de facto ruler of the wealthy Gulf state landed in Ankara, a senior government official said. Turkish President Recep Tayyip Erdogan, who is under a lot of pressure domestically due to high inflation in Turkey and other economic problems, wanted to receive bin Salman in Ankara.

The journalist and government critic Khashoggi, who wrote for the Washington Post, was murdered on October 2, 2018 during an appointment at the Saudi Arabian consulate in Istanbul. He had an appointment there to prepare for the wedding with his fiancée, a Turkish citizen. According to official information from Turkey and the USA, a 15-man commando from Saudi Arabia was waiting in the representation, murdered him, dismembered his body and made the remains disappear.

A US intelligence report concluded that bin Salman had sanctioned the assassination by the 15-man commando from Saudi Arabia. The royal family rejects this. The Turkish government had also made sharp accusations against Saudi Arabia and negotiated the murder in its own country – but then, to the outrage of many, handed over the court case to Saudi Arabia in April.

“Doesn’t change the fact that he’s a killer”

Khashoggi’s fiancee Hatice Cengiz criticized the Crown Prince’s visit, writing on Twitter: “His visit to our country does not change the fact that he is a murderer.” Diplomatic efforts could not legitimize injustice and injustice.

The murder had caused international outrage and severely strained relations between Riyadh and Ankara. Erdogan traveled to Saudi Arabia for the first time since the murder in April and said he wanted to intensify relations. Observers see primarily economic interests behind the rapprochement. Turkey is in a currency crisis with more than 70 percent inflation.

Bin Salman, who is considered the de facto ruler of Saudi Arabia, was partially isolated internationally because of the Kashoggi murder. In the meantime, there has also been a rapprochement with other countries. US President Joe Biden is expected in the UK in July.