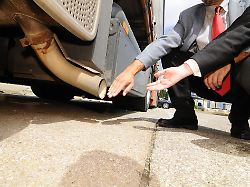 In a new attempt, the EU Parliament agrees on a position on emissions trading. In the future, more industries are to pay for the emission of gases that are harmful to the climate. In addition, CO2 trading certificates that are issued free of charge are to be phased out gradually and then eliminated altogether.

After a long debate, the European Parliament has agreed on a position on controversial proposals for climate protection. The agreement that was voted on stipulates, among other things, that the free allocation of certificates for CO2 emissions is to be gradually phased out from 2027 and completely eliminated from 2032. Emissions trading is also to be extended to buildings and transport. With emissions trading (ETS), certain industries have to pay for the emission of climate-damaging gases such as CO2.

However, the projects still have to be coordinated with the EU countries. They want to agree on their position next week before the two institutions start negotiations with each other. Only when a compromise has been reached can the project come into force. The proposals for climate protection had already been presented by the EU Commission last summer.

Parliament also spoke out in favor of setting up a climate social fund and a kind of CO2 tariff at the EU’s external borders. The climate social fund is intended to relieve the burden on citizens, since more climate protection is also expected to result in higher costs for consumers. The aim of the CO2 tariff is to prevent cheaper products that are manufactured abroad, which are more harmful to the climate, from becoming a problem for EU companies.

The agreement was negotiated by Christian and Social Democrats and the Liberals in the European Parliament, but also supported by the Greens. Two weeks ago, a first proposal on the subject failed in Parliament. From the point of view of SPD MP Tiemo Wölken, this would have significantly diluted emissions trading.