From parasite to symbiont: hair follicle mites become one with humans 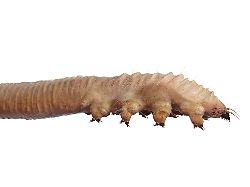 From parasite to symbiote
Hair follicle mites become one with humans

They’re born on us, they feed on us, they mate on us, and they die on us: The tiny hair follicle mites are so dependent on humans that they gradually evolve from parasite to symbiote, researchers find. This is not necessarily a disadvantage.

They are about 0.3 millimeters long and live on us, with us, by us: hair follicle mites of the species Demodex folliculorum. Most people are hosts to these mites, which spend most of their short lives hanging upside down in our hair follicles, primarily on the face. In fact, humans are the only habitat for Demodex folliculorum. Their entire life cycle revolves around eating dead human skin cells.

New research now suggests that Demodex folliculorum is so dependent on humans for its survival that the microscopic mites are in the process of evolving from an ectoparasite to an internal symbiont – one for both beneficial relationship with its host. In other words, these mites gradually fuse with our bodies so that they live permanently in and on us.

For the first time, scientists have succeeded in creating a complete DNA analysis of our tiny roommates. By sequencing the genomes, Alejandra Perotti’s team can draw conclusions about mating habits, body traits and the evolutionary future of Demodex folliculorum. ‘We found that these mites have a different arrangement of genes for body parts than other similar species because they have adapted to sheltered life in pores,’ explains the biologist from the University of Reading in the UK. “These changes in their DNA have resulted in some unusual body traits and behaviors.”

Hair follicle mites reside in our hair follicles on our face, eyelashes and nipples. During their short two-week lifespan, they feed on the sebum secreted by the cells in the pores – their only source of nutrition. They are not exposed to food competitors, enemies or other threats.

This isolated existence, in which they do not compete with other mites and do not infest other hosts, led, according to the new Study published in the journal Molecular Biology and Evolution, to a genetic reduction. This means: they have become extremely simple organisms, their genome has been reduced to the essentials. Its tiny legs are powered by just three single-celled muscles, and its body has the bare minimum of protein – just enough for it to survive. Demodex folliculorum therefore has the lowest number of proteins ever observed in this or any related species.

The gene reduction is also the reason for their nocturnal behavior, the study says. The hair follicle mites only come out under cover of darkness to slowly and laboriously crawl across the skin, find a mate and hopefully mate before returning to the safe darkness of a follicle.

Because the mites lack UV protection. They’ve also lost the gene that causes them to wake up in daylight. At the same time, however, they are unable to produce melatonin – a substance that makes small invertebrates active at night. The landlord takes care of that for you. Humans release melatonin through their skin at night, which Demodex folliculorum then eats. This is the only way for them to mate and reproduce.

The sex life of the hair follicle mites is also rather unusual. In contrast to other mites, the reproductive organs have shifted to the front of the body due to the special gene arrangement, with the male’s penis protruding forward and upward from the back, the researchers write. This means that in order to mate, he must position himself under the female and latch on to a human hair.

The arduous mating is important for the survival of the tiny creatures. But the potential gene pool is very small: there are very few opportunities to expand genetic diversity. This could mean that the hair follicle mites are on the way to an evolutionary dead end, the study authors suspect. At worst, they could die out. Something like this has already been observed in bacteria living in cells, but never in an animal, the study says.

What doesn’t sound like a big loss at first doesn’t necessarily have to be an advantage for people. Until now, the scientific world has assumed that Demodex folliculorum does not have an anus and instead accumulates feces in its body, which are released after the mite’s death and can cause skin diseases. The research team refutes this in their study. The hair follicle mites do have an anus, which was probably overlooked in the past because of its small size.

“Mites have been blamed for a lot,” says Henk Braig, co-author of the study and a zoologist at the University of Bangor in Wales. “However, their long association with humans could also suggest that they may have simple, helpful tasks, such as keeping the pores on our face open.”

And yet another misconception about this mite species was disproved in the study. The mites have many more cells in the nymph stage, i.e. when they are young, than later in the adult stage. This contradicts the previous assumption that parasitic animals reduce their cell count early in development. According to the research, all of this shows that the mites are on the way from parasites to symbionts.