Grilling with Öko-Test: A grilled sausage is “poor” 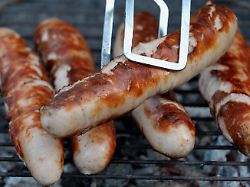 Grilling with Öko-Test
A grilled sausage is “poor”

Bratwurst or grilled sausage is a German bestseller – worldwide. In addition, the barbecue season is in full swing. Nevertheless, not every sausage should be on the grill – because there is not only good things hidden under the skin, as Öko-Test has to find out.

Summer is here, the grill is glowing – the perfect prerequisite for a successful evening. And without sausage, no barbecue is conceivable in this country. A decision that, in the opinion of “Eco test” should better be reconsidered. Because the magazine urges caution when eating sausages. On the one hand because of the quality of the goods examined, on the other hand because of the mostly horrific conditions under which the sausage contents have to suffer during its short life. That’s right, that’s what it means the pig.

Because that’s what the 19 currently tested brewed grilled sausages are made of. Including seven Thuringian grilled sausages. The goods come from well-known sausage manufacturers, as well as from organic markets and private labels from discounters and supermarkets.

Too much salt, phosphate and mineral oil components

And without spoiling the reader’s appetite before the grill is even lit, it should be mentioned that there are mineral oil hydrocarbons (MOSH/MOSH analogues) in 12 grilled sausages. In Packlhof’s organic product, it was even in a quantity that the testers classified as “greatly increased”. A possible source of the mineral oil components are lubricants on machines used in sausage production. However, they can also get into the grilled sausages via sausage casings, spices or herbs. In animal experiments, these mineral oil saturated hydrocarbons (MOSH) caused organ damage.

Except for the organic sausages and the “Bratmaxe 5 pieces by Meica”, all grilled sausages contain phosphates. As stabilizers, they make the sausage meat smoother. This additive is prohibited in organic foods. Added phosphates can increase blood phosphate levels, which is particularly problematic for people whose kidney function is impaired. In addition, from the testers’ point of view, there is too much salt in six sausages. With one of these sausages you sometimes already have a third of the maximum amount of salt recommended per day by the German Society for Nutrition.

As far as the germ load is concerned, however, Öko-Test gave the green light. Only the “Penny Rost Bratwurst” (“sufficient”) exceeds the guideline value for sulfite-reducing clostridia. In this amount, the germs do not necessarily make you sick, but the find indicates a lack of hygiene.

Sausage eaters should also know that the conventional way of keeping the approximately 60 million pigs slaughtered in Germany every year is far from “species-appropriate”. In their six months of life, the piglets will be noisy Eco test the curly tail docked. In males, the scrotum is cut open, the spermatic cord is ripped out, cut off, and both testicles are removed—all without anesthesia or painkillers. In addition, the high doses of antibiotics widely used are a problem.

The conventionally produced grilled sausages cut off with “satisfactory” at best. The “Meica Bratmaxe 5 pieces” only get a “sufficient” because of insufficient transparency/animal husbandry. The “BBQ bratwurst hearty 10 pieces” from Aldi Nord/Aldi Süd are the test losers (“poor”). In addition to too much salt and phosphorus, they were also found to have increased mineral oil components.

And how do the sausages taste? After bratwurst. After all.