Heavy rescue in Afghanistan: number of victims after earthquake rises to over 1000 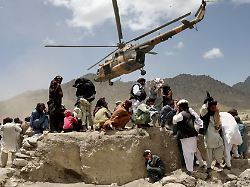 Heavy rescue in Afghanistan
Earthquake death toll rises to over 1,000

The horror after the earthquake in Afghanistan is great. The number of victims is steadily increasing. In addition, the rescue work is made more difficult by rainfall and the impassable terrain.

After the devastating earthquake in the Afghan-Pakistani border region, rain has made rescue work more difficult. The authorities reported at least 1,000 dead and 1,500 injured. Helpers dug in with their hands and provided survivors with food and clothing. Mass graves were also dug. The massive tremor had startled numerous residents early Wednesday morning.

He has never experienced such horror, said Khalid Sadran, police spokesman for the incumbent Taliban government. “Even though we’ve spent our lives exploding bombs.” And further: “It was unbearable. We prepared food for them from the army corps. They were hungry, tired and scared. Then it started to rain.”

“Many bodies have not yet been recovered. Some are in the houses and some are under the rubble,” a resident of the affected areas in the east of the country told the Tolonews TV station. “We need cranes, they should build our houses and they should bring us tents. We spent the night out in the mountains,” the man complained.

The Taliban leadership expressed its sympathy and condolences to the victims. According to OCHA, up to 1,800 houses were destroyed in the affected provinces. Afghan media reported that one village had been completely destroyed. The construction in the poor and economically weak region is not earthquake-proof for cost reasons, many families live close together. The rescue work was made more difficult by the access to the remote mountain region. The militant Islamist Taliban, who have ruled Afghanistan again since August 2021, called an emergency cabinet meeting. Several helicopters were sent to the disaster area to help local people. A government spokesman called on aid organizations for support. Some aid organizations arrived on site on Wednesday.