‘Hope to be one day’: Zidane admits ‘deep longing’ for dream job 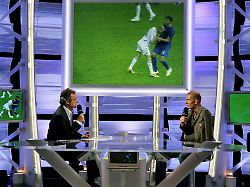 Zinedine Zidane is perhaps the most notable among the many outstanding French footballers of recent decades. His angry exit in the 2006 World Cup final is iconic. As coach of Real Madrid he wins numerous titles. On his 50th birthday he reveals his big dream to “L’Equipe”.

Zinedine Zidane dreams of a future as coach of the French national football team. “I hope one day will be,” he said in an interview with the French sports newspaper “L’Equipe” on the occasion of his 50th birthday. Zidane left open whether he could already follow the current coach Didier Deschamps. If it’s supposed to happen, it will happen. “My deep longing is there. The French team is the most beautiful thing there is,” said Zidane.

Looking back on his career as a player, the 1998 world champion, 2000 European champion and three-time world footballer described the 1999/2000 season as his best season. “Our French team was exceptional. Euro 2000 remains the pinnacle of this generation,” said Zidane.

The Frenchman also has fond memories of the Champions League win with Real Madrid in 2002 against Bayer Leverkusen (2-1). “With that victory in Glasgow I had won everything at almost 30 years old,” he said. Zidane was the only coach to date to win the premier class three times in a row with Real from 2016 to 2018. The 50-year-old said of the role as a coach: “It’s different, but everything is wonderful.”

Zidane wants to end his current coaching hiatus but is in no rush to do so. “I do what I feel when I feel it. I do everything with my heart,” he said. At the time of the interview in May, he said to a recurring rumor of an engagement with Paris Saint-Germain: “Never say never.” But he would rule out a job in the Premier League: “I understand English, but I don’t fully master it.”