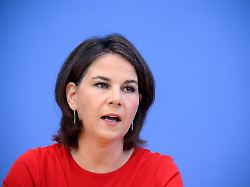 According to Foreign Minister Baerbock, around 345 million people around the world are currently threatened by food shortages. The politician criticizes that the Kremlin is deliberately trying to escalate this crisis by blocking grain exports from Ukraine. Russia is taking “the whole world hostage”.

Federal Foreign Minister Annalena Baerbock has accused Russia of “deliberately using hunger in the world as a weapon of war”. Russia “takes the whole world hostage,” said the Green politician before the start of an international nutrition conference in Berlin. 345 million people worldwide are currently threatened by food shortages, the hunger crisis is building “like a life-threatening wave before us”. But it was Russia’s war that “made a tsunami out of this wave.”

Baerbock criticized that Russia was trying to “put the blame for the exploding food prices on others”, but that was “fake news”. Russia blockade ports and shell granaries; there are also no sanctions against Russian grain exports.

The conference in Berlin is about showing solidarity with Ukraine and with the people in the Global South who are suffering from the Russian war, Baerbock said. “We have to offer solutions.” The aim is to “accelerate” food exports from Ukraine, for example by expanding land routes and inland waterways. They also want to work on acutely increasing emergency aid for people suffering from hunger. But the conference is not a donor conference, it’s not just about money. “Thinking beyond the day” is also on the agenda, Baerbock said: Poorer countries should better arm themselves against crises. It’s about “getting this tsunami under control somehow”.

The Federal Government has issued invitations to the conference from all over the world, and the interest has exceeded all expectations, said the Foreign Minister. On site in Berlin are 40 ministers, representatives of the UN and civil society and of countries that are particularly affected, such as representatives of Ukraine, Nigeria, Tunisia and Indonesia. The meeting also serves to prepare for the G7 summit from Sunday in Elmau, Bavaria. Concrete promises of financial aid are not to be expected at the Berlin conference.