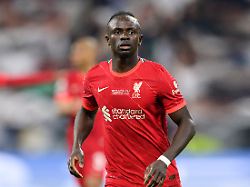 “In any case, we are all happy and proud that we can bring such a great player, such a world star to Munich,” said sports director Hasan Salihamidzic on Sky TV. You should also like to hear what Mané himself says from the record champions: “Every child wants to win the Champions League, every football player in the world. I’m now in a very, very competitive team. But it’s still a bit early to talk about the Champions League. Talking about the league final, we haven’t even played a game together yet, but we’ll do everything we can to get into the final,” said the Senegalese of the “Bild” newspaper.