It can happen to anyone: Why male depression is recognized less often 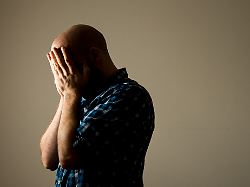 It could be everyone
Why male depression is recognized less often

Depression is considered a typical female disease, but many men also suffer from it. But men show different symptoms and seek help less often. Another problem is the traditional image of men. Experts are now hoping for a rethink.

On the outside, his life seems perfect: Benjamin Maack from Hamburg has two children, is happily married, has a very successful career as a journalist, and heads a department at “Spiegel”. But it looks very different in him, as the 44-year-old describes: “There was this moment when I worked so much that I was actually just a wreck at home, where I cried myself to sleep in the evening and just staring at the ceiling. I love my wife very much, I love my children very much, but to suddenly feel like a failure, it was very hard.”

That’s what happened to him eight years ago. Work, family – everything is too much for him. The collapse comes, he can no longer. Maack calls in sick for a day, a week, but it doesn’t get any better. “You’d think you’d rest and it would get better, but it just kept getting worse,” says Maack. “I have a friend who is a psychologist who said at some point, Benjamin, you are really, really sick.”

Social scientist Anne Maria Möller-Leimkühler has specialized in male depression. From her point of view, men are no less depressed than women, but they react differently. There are typical features that can indicate depression in men: aggressiveness, irritability, outbursts of anger in otherwise peaceful men, workaholism, excessive sport or sitting in front of the computer for hours. However, these symptoms make it difficult to recognize the disease. “The ‘Male Depression’ often occurs covertly, camouflaged behind typical male strategies of coping with stress. Men therefore keep up the facade of functioning for a long time and the depression remains invisible to the environment,” says Möller-Leimkuhler Magazine “GEO Knowledge Health”.

“Burnout first stage of a depression”

According to the German Depression Aid Foundation, depression is one of the most common diseases and one of the most underestimated in terms of its severity. In Germany, 11.3 percent of women and 5.1 percent of men are currently affected. But men are less likely to seek help and go to the doctor less often. According to Möller-Leimkuehler, men are more willing to see a doctor if the diagnosis is burnout instead of depression. After all, the cloak of the burnout diagnosis opens doors to professional help in the best case: “Burnout is the first stage of depression. But burnout has an advantage. It is not socially stigmatized. While depression, especially when it affects men, is highly stigmatized . The man is then a failure, a loser,” says the expert.

It’s been eight years since Benjamin Maack was diagnosed with severe depression. He has written a book about his experience entitled “If that’s still possible, it can’t be that bad”. For him it was clear to deal openly with the disease. “I think it’s easy to feel very alone with mental illness. But whenever you talk to someone about it, you’re going to find someone else who either has people around them who are having similar problems, or maybe even with them themselves experienced,” reports Maack.

Get out of the taboo zone

Expert Möller-Leimkühler would also like to see depression differently, and above all one thing: “Depression in men must be brought out of the taboo zone, so that it is not a personal failure, but that it is actually a disease that can be treated with antidepressants and with psychotherapy can treat.”

Medications and therapies have also helped Benjamin Maack and are still helping him to get his severe depression under control. But he also changed his life. Maack works less, more slowly and consciously takes time off. He is not cured, the depression continues to accompany him: “It’s a way, but it’s more of a way with the disease,” says Maack. You have to live with it, deal with it – so no defeating the disease or fighting it.

He very much hopes that in the future it will be possible to talk about depression in the same way as about other illnesses. And that he can contribute a part to it with his story. Because depression can affect anyone.