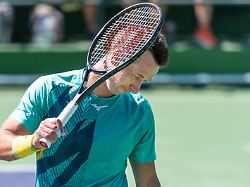 A “great and wonderful career” ends very small and unspectacular. Philipp Kohlschreiber puts an end to professional tennis. His dream of playing again in Wimbledon bursts in the qualification. What comes next is open. The German Tennis Association is already digging.

Philipp Kohlschreiber once jokingly described himself as “the best training partner in the world”. Roger Federer, Novak Djokovic, Stan Wawrinka – the stars of the tennis industry all liked to practice with the man from Augsburg during the tournaments. Because they knew what they were getting: a player who always performed highly professionally and consistently. An achievement that made him 16th in the world rankings ten years ago. With which he won eight tournaments and was among the top 50 in the world for years.

Kohlschreiber, who was always reliable during the transition phase of German men’s tennis between Tommy Haas and Alexander Zverev, has now ended his career. In the second round of qualifying for the grass classic in Wimbledon, the 38-year-old lost 7: 6 (7: 4), 3: 6, 4: 6 to the Kazakh Mikhail Kukushkin and thus missed a final qualification for a Grand slam tournament. At the beginning of the week Kohlschreiber announced that he would end his career after Wimbledon.

The last match of his career lasted 2:18 hours. Once again Kohlschreiber braced himself against the end. When the score was 2:5 in the third set, he fended off a match point and came back to 4:5. But then the moment had come, which he had felt for a long time, but which he had not officially announced until the beginning of this week. Kohlschreiber’s career ended in the relatively unknown Roehampton.

“It was a great and wonderful career,” he said after his opening win in qualifying. Kohlschreiber would have liked to have played again on the sacred lawn in Wimbledon, maybe even played on Center Court on Church Road again. There, where he had achieved his best result in one of the four Grand Slam tournaments in 2012 by reaching the quarterfinals.

And now? What’s next for Kohlschreiber, who flew around the world with a tennis racket for more than 20 years? “I don’t really have a plan yet,” he said. “It’s been a long journey, I have a lot of special memories, especially the year of my greatest success at a Grand Slam.”

The German Tennis Association recently showed interest in involving Kohlschreiber in the association’s youth work. It is still open whether the Augsburger, who won 478 games on the ATP Tour in his career and earned a total of more than $ 13 million in prize money, would like to do so. For the time being, Kohlschreiber will return to his adopted home of Kitzbühel and look back on a “great time”.