Lawsuit over “Rhode” products: Hailey Bieber has to go to court 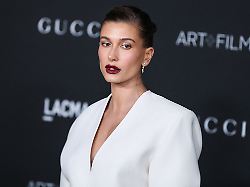 Lawsuit over “Rhode” products
Hailey Bieber has to go to court

Hailey Bieber wants to build a lifestyle brand: The model’s fashion and beauty products are to be sold under the name “Rhode”. The problem? This brand already exists. Now the founders of the original are going to court.

Hailey Baldwin Bieber has a problem: pop star Justin Bieber’s wife has just launched skin care products and she’s already in trouble. Fashion company Rhode has filed a lawsuit against the model for using the same name for her product line.

What Bieber had in mind is clear: “Rhode” is her middle name. However, the founders of the Rhode brand claim on Instagram that Hailey Bieber tried to buy the rights to the name from them four years ago. You would have refused. According to the founders, Bieber can use any name for her brand, “we only have the brand name Rhode, which we have built up”.

As the US magazine “People” reports, the founders have filed a lawsuit in New York against the model. It states that since May 2013 they have been “dedicated to the growth and nurturing of the Rhode brand through much personal sacrifice and hardship”. With success: the label is now considered a respected lifestyle brand that is sold in luxury stores and worn by celebrities such as Beyoncé and Rihanna.

The founders say they’ve seen “confusion in the market” since Bieber’s beauty brand launch last week, which has already hurt their brand. Also on Instagram. There, users would have mistakenly linked the account of Bieber’s company when they actually wanted to tag the company of the two founders.

They have serious concerns about the future, the founders said in their lawsuit. Bieber had also announced that he wanted to build the beauty line into a lifestyle brand, and clothing should also be part of it. The Rhode founders are disappointed “that an entrepreneur who we have been fans of for a long time is trying to strangle what we have built”.