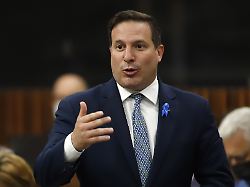 In Canada, too, politicians are increasingly becoming the target of attacks. They are mostly verbal, but could also escalate. To prevent this, parliamentarians are now given “panic buttons” and trained to de-escalate situations.

Canadian MPs are being given “panic buttons” that they can use to call security or the police in an emergency. This is in response to increasing harassment, intimidation and threats of violence, said Public Security Minister Marco Mendicino. Mendicino had himself received death threats online in recent weeks after proposing new gun laws.

With the mobile emergency devices, the police can be notified throughout Canada. They are intended to offer MPs and their employees more security. Parliament’s security service also offers them training to de-escalate violent situations.

Unfortunately, there is a lot of “anger and frustration” directed against the government and officials, Prime Minister Justin Trudeau said. “We need to make sure everyone who serves the community politically is safe.”

Trudeau had stones thrown at him during his campaign appearances in September last year – even though he was surrounded by security forces. He reported of demonstrators who “were practically foaming at the mouth, they were so angry with me”. There were also racist and misogynistic comments.

Debates instead of threats demanded

Jagmeet Singh, leader of a small left-wing party, was insulted and threatened by an angry crowd outside an event last month. The incident had upset him very much, it was “one of the worst experiences” he had ever had, Singh said afterwards.

“The situation is very worrying,” Mendicino said. The “very negative and toxic rhetoric” on the Internet could lead to violence. “We need a space where we can have lively debates without insults, near-physical attacks and incitement to violence and death threats,” he said.