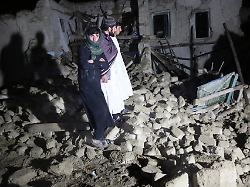 A tremor jolted people along the border between Afghanistan and Pakistan early Wednesday morning. Hundreds of residents are killed and the death toll is expected to continue to rise.

Rescue work continues after the devastating earthquake in the Afghan-Pakistani border region. At least 1,000 people were killed and 1,500 injured, according to the state news agency Bakhtar. In the meantime, helpers were digging up mass graves in the areas affected by the accident. The massive tremor had startled numerous residents early Wednesday morning.

The Taliban leadership expressed its sympathy and condolences to the victims. According to OCHA, up to 1,800 houses were destroyed in the affected provinces. Afghan media reported that one village had been completely destroyed. The construction in the poor and economically weak region is not earthquake-proof for cost reasons, many families live close together.

The rescue work was made more difficult by the access to the remote mountain region. The militant Islamist Taliban, who have ruled Afghanistan again since August 2021, called an emergency cabinet meeting. Several helicopters were sent to the disaster area to help local people. A government spokesman called on aid organizations for support. Some aid organizations arrived on site on Wednesday.