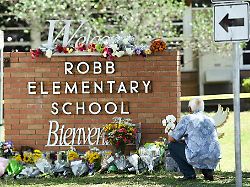 In late May, an 18-year-old gunman shot dead 19 children and two teachers at a Texas school. The police were subsequently heavily criticized for their hesitant intervention. This has consequences for the police chief.

Nearly a month after the massacre at a Texas elementary school, the school district’s police chief has been suspended until further notice. There are several ongoing inquiries into the incident, but it is unclear when the results will be available, said Uvalde School District Superintendent Dal Harrell. In view of the “continued lack of clarity”, he decided to put police chief Pete A. on leave with immediate effect, it said.

An 18-year-old gunman shot dead 19 children and two teachers at a primary school in the small town of Uvalde at the end of May. The attacker shot the children and teachers in two connected classrooms with an assault rifle. Only about 75 minutes after the shooter opened fire, emergency services penetrated into the room and killed the perpetrator.

The police were heavily criticized for their hesitant intervention. At a hearing in the Texas Senate, Texas Public Safety Director Steven McCraw said on Tuesday that just three minutes after the shooter entered a classroom and opened fire, nine police officers were outside the room, two of them with guns. More were gradually added. The operations manager decided to wait for reinforcements, more guns and protective equipment. None of this was necessary, McCraw argued.

In such a situation, if in doubt, a police officer with a gun is enough to stop the gunman – even if that poses a risk for the officer. The police officers outside the room had guns, protective gear and the training for such situations, but the children had none, McCraw said. Nevertheless, the students and teachers had to wait “an hour, 14 minutes and 8 seconds” for emergency services to enter the room to save them.