Neglect and contempt: “Team Wallraff” documents the humiliation of those in need of care 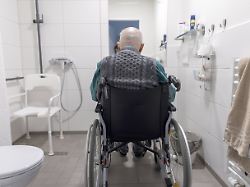 The images are hard to bear, senior citizens lying in dirty beds and being treated harshly by the nursing staff. Reporters film such situations again and again. Are these really just isolated cases? The “Team Wallraff” follows up with an operator.

For years, the investigative reporters of “Team Wallraff” have been documenting scandalous conditions in German old people’s and nursing homes. It was not until February that they showed the consequences of staff shortages and austerity measures in privately run care facilities.

The pictures were so shocking that just one day after they were broadcast, the Augsburg facility of the “Sereni Orizzonti” care chain, which had been checked, was closed – allegedly due to a corona outbreak. Employees had also confirmed the reported conditions. Since then, nursing staff and relatives have contacted RTL and reported shocking experiences in elderly care. They all described similar conditions in various care facilities as the reporters experienced during their undercover operations in late summer 2021: run-down rooms, a lack of staff and being overwhelmed, as well as care errors.

One operator in particular stood out in the letters: the private provider “Alloheim”. In February, the company pointed out, among other things, that these were only regrettable isolated cases. But don’t the numerous current calls for help suggest otherwise? “Team Wallraff” followed the clues and was again undercover in three different private facilities of the “Alloheim” group. RTL shows the worrying results today at 8:15 p.m. in the new edition “Team Wallraff – Now even more so!”.

With more than 240 retirement homes throughout Germany and 23,600 care places, the “Alloheim” company is the second largest private provider in Germany. A nurse from the “Ederbergland” senior citizens’ residence in Frankenberg reported to “Team Wallraff” with a call for help. He reports that the residents were treated aggressively in some cases, and that gross care mistakes were made. During a six-day undercover operation, an RTL reporter witnessed on the first day how an over 80-year-old resident was insulted and humiliated by a nurse because he urinated in his bed. It is known that the elderly gentleman has long needed a catheter. The reporter witnesses several times how the resident is punished for wetting himself.

In a statement to RTL, “Alloheim” writes: “Alloheim has clear guidelines for dealing with incontinent residents: people who (…) experience involuntary urine loss receive appropriate aids to prevent uncontrolled urination in bed to counteract”. It goes on to say: “We attach great importance to treating the residents entrusted to us with respect and dignity. Any other behavior by the employees towards our residents will not be accepted.”

A lack of specialist staff and gross care mistakes – that should also exist in the “Alloheim” retirement home “Brunswik”. An RTL reporter will investigate these allegations in spring 2022 during a two-week internship at the “Young Care” ward. People in need of care between the ages of 18 and 65 are housed and cared for in a retirement home. Is the company exploiting a gap in the healthcare system with this new concept in order to make more profit?

A large number of grievances are also documented in this facility, including significant deficiencies in the daily hygiene of the residents with sometimes painful-looking inflammations. Some employees admit that they did not receive proper training. “Alloheim” denies this and writes in the statement to RTL: “All nursing assistants working in young care receive four-week training in young care, including training on the clinical pictures and how to deal with them. This is independent of and in addition to training as a Nursing assistants. (…) Nursing assistants are used in the young nursing department in accordance with the regulations and are also supervised by a nursing specialist.”

The nursing home advertises that it offers various therapy and employment opportunities for those in need of care in the “Young Nurses”. Accommodation in this area is billed at just under 6000 euros per month. However, the reporter does not hear anything about therapy offers during her internship. “Alloheim” writes in its statement that the nursing staff would undergo numerous training courses, including psycho-social ones, and justifies: “The aim of young nursing is to maintain mobility and to promote and return to possible rehabilitation, more independent living or a more independent life .(…) We firmly reject the (…) accusation that the residents in “Young Care” are not sufficiently activated. (…) In addition, we object to the accusation that ‘Alloheim’ is primarily just about more profit.”

Lauterbach sees privatization as a mistake

“Team Wallraff” also confronted Health Minister Karl Lauterbach with the video material from the undercover operations. How could it come to this? For the Minister of Health, the mistake lies in the privatization of the care industry with the introduction of care insurance in 1995. “Now it’s the case that these private investors simply cannot be expropriated,” said Lauterbach in the RTL interview. “That’s not legally feasible. Looking back, I would have thought it was right if care had simply remained a municipal task.”

“Corporations like ‘Alloheim’ have to be controlled much more strictly – and if they can’t combine the pressure on returns and humane care, they have to be closed,” concludes Günter Wallraff after the new research. In principle, no nursing home should maximize profits at the expense of the residents. The “Alloheim” chain speaks of individual failures and isolated cases. “I leave it to you to judge.”