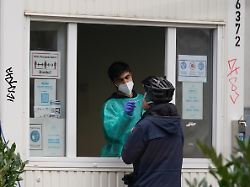 This month, all citizens are entitled to one free corona test per month. But this is changing. In view of the tense budget situation, three euros will be due in the future. Risk groups are excluded.

There should also continue to be an offer with free corona quick tests for risk groups over the summer – but for everyone else “citizen tests” should cost three euros in the future. This was announced by Federal Minister of Health Karl Lauterbach after a corresponding agreement in the government on a new test regulation, which is to apply from June 30th.

He would have liked to continue free citizen tests for everyone, said the SPD politician. In view of the costs of an average of one billion euros per month, the federal government can no longer afford this in the tight budget situation. The new concept now envisages spending of 2.7 billion euros by the end of the year – with full takeover, up to five billion euros would have been expected.

Free rapid tests should continue to be possible for vulnerable groups in the future, including children up to five years of age, women at the beginning of pregnancy and visitors to clinics and nursing homes. The federal states would have the option of taking over the own contribution of three euros for other groups as well.