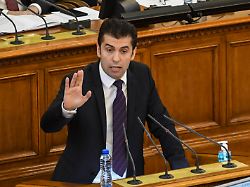 vote of no confidence in Parliament
Government in Bulgaria overthrown

First his coalition loses the absolute majority in parliament, then Bulgaria’s Prime Minister Petkov overthrows a vote of no confidence. After only six months in office, he has to vacate his post. Because the parties are at odds with each other, there could be new elections in the fall.

In Bulgaria, the pro-Western government of Prime Minister Kiril Petkov was overthrown after just six months by a vote of no confidence. In the Sofia parliament, a majority of 124 deputies voted in favor of the corresponding motion by the bourgeois opposition party GERB. Petkov was supported by only 115 deputies. His liberal-socialist coalition lost an absolute majority in parliament two weeks ago after the withdrawal of a populist party. There may now be new elections.

Petkov’s government had only been in office since December. He had promised to fight widespread corruption in the poorest EU country and to reform the judiciary. Petkov blamed his predecessor Boiko Borissow (GERB) and Russia for his fall. After the defeat, he said: “This vote is just a small step on a very long road. One day we will have a Bulgaria without behind-the-scenes actions, without mafia.”

The GERB had justified its application with a “failure of the government in financial and economic policy”. The inflation rate in Bulgaria was 15.6 percent in May. On the day of the vote of no confidence, hauliers protested in front of Parliament against the high fuel prices.

Entertainer Slawi Trifonov’s populist ITN party recently withdrew its four ministers from the previous four-party government in protest at Petkov’s North Macedonia policy. Trifonov accused the head of government of wanting to make concessions to the neighboring country on his own. Bulgaria has been blocking the start of EU membership negotiations with North Macedonia since the end of 2020.

According to the constitution, Petkov’s anti-corruption party, “We’re Continuing Change,” is now once again tasked with forming a government. With 67 MPs, it has the largest group in the 240-seat parliament – but is far from having its own majority. In view of the fact that the parties are at odds with each other, experts are not ruling out new elections in the fall.