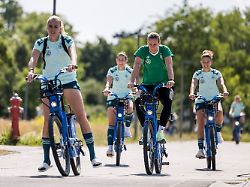 The women wouldn’t even hold their own against a boys’ U15 team. The footballers should therefore not complain about less money. Laura Freigang can no longer hear such justifications. The international enjoys the fact that women are “longer carefree”.

National soccer player Laura Freigang does not feel jealous of the financial conditions in the male professional field. “Of course money plays a big role and everything that comes with the money. The money changes the structures enormously,” said the 24-year-old from Bundesliga club Eintracht Frankfurt in an interview with the “Frankfurter Allgemeine Zeitung”. “We women are carefree longer. That’s a great luxury.”

She is not jealous that her male colleagues earn so much money so early. “Football here still feels very honest and direct. I like that, a lot of fans want that too – and that’s an opportunity to strengthen our position,” she said.

Freigang is annoyed by the comparisons between women’s football and men’s football. “We don’t compare ourselves at all. But you get it from the outside all the time,” she said. It’s exhausting, “because it always comes in the same breath with the reason why we don’t get some demands met”.

The women are often accused of not even winning against the U15s of a boys’ team. “As if it were a legitimate argument and had anything to do with what we want or what the content of the fight for recognition is about.”

Freigang is currently preparing with the women’s national team for the European Championship finals from July 6th to 31st in England. This Friday (5 p.m.) the selection of national coach Martina Voss-Tecklenburg will complete a test against Switzerland in Erfurt. At the European Championship, the DFB selection meets Denmark, Spain and Finland in the preliminary round.