“One and a half weeks apart”: Is Kendall Jenner single again? 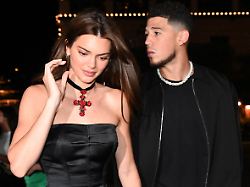 “A Week and a Half Separated”
Is Kendall Jenner Single Again?

Kendall Jenner and Devin Booker were a couple for two years. But now there should be a real crisis between the model and the basketball player. A source close to Jenner speaks of separation.

Is Kendall Jenner Single Again? At least that’s what several US media are reporting. She is said to have taken a break from her relationship with basketball pro Devin Booker. An unnamed source close to Jenner told E! News, “Kendall and Devin have had a rough time recently and have been separated for about a week and a half.”

During sister Kourtney Kardashian and Travis Barker’s wedding celebration in Italy in May, the two are said to have had a good time, according to insiders. When they came back, “they had the feeling that they didn’t fit together”.

They would have found they had different lifestyles. Jenner would therefore need “distance and time for himself”. However, the two continued to be in contact. A love comeback is therefore not excluded. “They both hope it works, but at the moment they are separated.” There is no official confirmation so far.

Romance rumors first surfaced in April 2020 after Jenner and Booker were spotted together. But it was not until February 2021 that the 26-year-old officially appeared on Instagram with her new boyfriend. She shared a photo of the couple in a story to celebrate Valentine’s Day. Otherwise, the model largely keeps his love life out of the public eye.