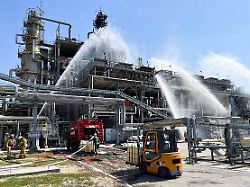 A fire broke out in an oil refinery in southern Russia near the Ukrainian border this morning. The operator blames a drone attack. Videos are circulating on social media that appear to show a drone crashing into the refinery.

A fire broke out in a refinery in southern Russia near the border with Ukraine after a drone crashed. “The firefighters completely extinguished the fire that broke out in the morning at the Novoshakhtinsk oil processing plant in the Rostov region,” said the local civil defense, according to the Interfax agency. The fire only covered a small area of ​​about 50 square meters and was quickly brought under control, according to the authorities. So nobody was injured.

According to the Russian authorities, the fire is believed to have been caused by a drone attack. “According to one version, the fire was caused by a drone attack on technical devices of the plant,” Rostov region governor Vasily Golubov told Telegram. The operator of the facility also blames a drone for the fire. Work in the refinery had been suspended for the duration of the investigation, Golubov explained.

Videos circulated on social media showing a drone flying toward the refinery, then crashing there before causing a major explosion and flames. After the start of the Russian war of aggression against Ukraine, Russian border regions have repeatedly been the target of attacks in recent weeks – according to information from Moscow from the Ukrainian side. Kyiv does not comment on these allegations. According to the commentators of the video, the drone came from the direction of Ukraine. However, the separatist areas of Donetsk and Luhansk still lie between the Rostov-on-Don region and the area of ​​Ukraine controlled by Kiev troops.

Since the start of the Russian military offensive in Ukraine at the end of February, Russia has repeatedly accused Kyiv of attacks in the border area. Last month, according to the governor of the Kursk region, one person died in a Ukrainian attack on a village on the border. In early April, the governor of the Belgorod border region accused Ukraine of attacking a fuel depot with two helicopters. Earlier this week Moscow accused Ukraine of attacking production platforms off Russia’s annexed Crimea Peninsula in the Black Sea.