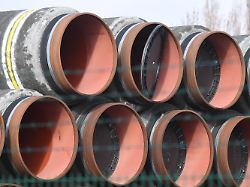 The controversial Nord Stream 2 pipeline project has been on hold since the outbreak of the Russian war of aggression against Ukraine. However, at least part of the system could find other uses in the future. According to a report, the Federal Ministry of Economics wants to convert some tubes.

According to a media report, the Federal Ministry of Economics is planning to convert part of the pipe system of the Nord Stream 2 gas pipeline so that it could be used as a connection for a liquid gas terminal on the Baltic Sea coast. That writes the “Spiegel” and refers to its own information. Accordingly, Minister Robert Habeck’s department is considering expropriating the part of the system located on German soil and cutting it off from the rest of the pipeline. The aim is to be able to connect the pipes that lead from land to sea to a mobile LNG terminal.

According to plans by the federal government, the import of liquefied natural gas (LNG) will play an important role in the future as a substitute for gas supplies from Russia. Four floating terminals are planned so far: one in Wilhelmshaven and one in Brunsbüttel is to go into operation by the end of the year, and further locations in Stade, Hamburg and Lubmin in Mecklenburg-Western Pomerania on the Baltic Sea are under discussion. Two stationary terminals are also planned.

As the “Spiegel” reports, employees of the Ministry of Economic Affairs have already met with representatives of Nord Stream 2 Holding. The holding belongs to the Russian state-owned company Gazprom. According to the magazine, one advantage of converting the pipes is that at the end of the pipeline there is “a perfect distribution network with compressors and lines that could transport the gas directly to southern Germany”.

However, the project appears to be delicate, and resistance is threatened not only from the Russian side. In all likelihood, lifting and separating the pipeline is technically possible. However, according to experts, there are environmental problems, the area is protected by natural law, and any change would almost inevitably involve planning approval procedures and an environmental impact assessment.

It is also unlikely that Gazprom would agree to such a reallocation. The “Spiegel” writes that there are still managers in the state-owned company who are hoping to be able to activate the pipeline again after the end of the war in Ukraine. The magazine quotes from industry circles as saying that there are also fears in Berlin of Russian retaliatory actions, such as the expropriation of German companies in Russia. According to “Spiegel”, the Ministry of Economic Affairs did not want to comment or deny the report.

The Nord Stream 2 gas pipeline has now been completed. However, the controversial project did not receive an operating license after the Russian invasion of Ukraine.