Podcast “Learned something again” about Peter the Great: Putin follows in the footsteps of the Emperor 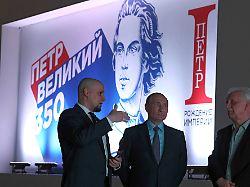 Who Was Peter the Great?
Putin follows in the footsteps of the Russian Emperor

With the war in Ukraine, Vladimir Putin wants to “take back Russian soil,” as he says. The Russian president repeatedly justifies his plans with Russian history. The model is Peter the Great, who expanded the Russian Empire about 300 years ago with brutal wars of aggression.

When Vladimir Putin talks about the war against Ukraine, it becomes clear in which world of ideas the Russian president lives. In these moments, Putin draws a wide arc, justifies his actions with centuries of history and now compares himself to famous Russian tsars such as Peter the Great, whose 350th birthday Russia celebrated on June 9th.

Peter I waged the Great Northern War from 1700 to 1721 and won against Sweden, a major power at the time. As a result, parts of what was then Sweden and the Baltic States fell to Russia – i.e. today’s Estonia, Latvia and Lithuania. The tsarist empire gained supremacy in the Baltic region. In Putin’s eyes, however, Peter did not wage a war of aggression, but merely reconquered areas that would have belonged to Russia by now. That’s his version of the story.

Peter the Great came to power when he was 17

Peter the Great was born Peter Alexeyevich on June 9, 1672 – the son of the then Russian ruler Alexei Mikhailovich. When his father died four years later, Peter’s half-brother Fyodor III was first. appointed tsar. After Fyodor’s early death in 1682, power struggles and uprisings over the succession to the throne broke out, since Alexei’s other two children – Peter and Ivan – were not yet grown up. Although the two sons were proclaimed tsars after Fyodor’s death, Peter’s half-sister Sophia became regent. In 1689, Peter himself came to power – at the age of 17.

He was very patriotic and highly motivated, wanted to build Russia into a great power. The country was too backward for him, he wanted to modernize it according to the Western model, especially technologically. So, in his mid-twenties, he traveled around Western Europe to acquire knowledge and hire experts. Since Peter saw a lot of catching up to do in shipbuilding, he worked in a Dutch shipyard for several months at the end of the 17th century. There he studied the construction of large sailing ships, which he later had copied in Russia.

War to “retrieve and strengthen”

During his 42-year reign as Tsar, Peter the Great not only modernized his homeland. He was also at war, from 1700 to 1721 Russia attacked Sweden. At first things went badly, in 1709 the battle of Poltava – in today’s Ukraine – turned the tide of the war. In 1721 the war ended, from which Russia emerged as the ruler of the Baltic Sea region. Peter the Great even had a new Russian capital built right on the Baltic Sea during the Northern War: Saint Petersburg.

But the area conquered by the Russians was not recognized as Russian by any European country at the time, even though many Slavs lived there, Putin says 300 years later. That was the real reason for Peter the Great’s campaign: the tsar waged war in order to “bring back and strengthen” the regions, says Putin. The Russian president is planning exactly the same thing with his attack in Ukraine.

Vladimir Putin sees himself in the tradition of the Russian tsars. He puts himself on a par with Peter the Great, is obsessed with Russian history and thus justifies his fantasies of expansion, which should lead to a new world order. The Russian President also made this clear at the economic forum in St. Petersburg. “The era of the unipolar world order is over”said Putin. The USA would no longer dominate the world in the future, instead there would be a multipolar world, with “sovereign states like Russia” at the top.

“The goal is Ukraine, not just Donbass”

Putin wants to turn back time and rebuild the Russian empire. To do this, however, he must annex Ukraine, which he denies at every opportunity the right to independence: every country, every people, every ethnic group must be able to guarantee their own sovereignty, Putin claims. There are only two options, he says: a country is either sovereign or a colony. For Putin, Ukraine is a colony.

However, four months after the start of the war, the plan to bring Ukraine completely under Russian control failed: Russia has withdrawn from large parts of Ukraine and is currently concentrating its attacks on the east of the country, the Donbass.

Still, conquering all of Ukraine remains Putin’s goal Military expert Carlo Masala from the Bundeswehr University in Munich “stern” podcast “Ukraine – the situation” convinced. “The great goal of occupying all of Ukraine has not yet been abandoned. You might not do it now. You will do it after the troops are regenerated. It will take. But the goal is Ukraine and not just Donbass.”

Putin is an imperialist who does not accept the borders of today’s Russia. He has this in common with Peter the Great, who appropriately changed his title from Tsar to Emperor after winning the Northern War against the Swedes. A name that 300 years later would probably also appeal to Vladimir Putin.

“Learned again” is a podcast for the curious: get it Deutsche Bank get their money from Donald Trump return? why some commercial pilots pay money for their job? Why pull Pirates from East to West Africa? Listen in and get a little smarter three times a week.

All episodes can be found in the ntv appat AudioNow, Apple Podcasts and Spotify. “Learned something again” is also included Amazon Music and Google Podcasts available. For all other podcast apps, you can use the RSS feed use.