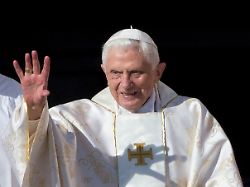 The case of the pedophile priest Peter H. puts the emeritus Pope Benedict in trouble again. One of the priest’s victims has reportedly filed a lawsuit against him, knowing he was a repeat offender. Will the 95-year-old soon have to answer to a secular court?

A victim of the pedophile priest Peter H. has filed a lawsuit against Cardinal Joseph Ratzinger – ie Pope Emeritus Benedict XVI. – and other church representatives submitted. This was reported by the research association Correctiv, the “Zeit” and the Bavarian Radio. Accordingly, the 95-year-old may have to answer to a secular court for the abuse scandal in the Catholic Church. The emeritus Pope had “knowledge of all circumstances and at least accepted the fact that this priest is a repeat offender,” the complaint says.

The now 38-year-old plaintiff accuses the emeritus head of the church of having used the priest in church work with children and young people despite knowing better. Ex-Pope Benedict admitted H. to his diocese of Munich and Freising during his time as Archbishop Joseph Ratzinger in the early 1980s, although H. was known to have a pedophile record. In Bavaria, the priest then committed further acts of abuse.

The crimes are largely statute-barred. According to the report, the attorney for the man from Bavaria who is now suing, the Berlin criminal defense attorney Andreas Schulz, has filed an action for a declaratory judgment in order to establish the guilt of the church. If the court comes to the conclusion that then-Priest H. abused the plaintiff, the church could be “obligated to compensate him for the damage,” the media quote from the complaint. According to the report, the lawsuit filed with the district court of Traunstein is also directed against Cardinal Friedrich Wetter and the Vicar General of the Archdiocese of Munich and Freising, Christoph Klingan. According to the victim’s lawyer, Ratzinger, Wetter and the Archdiocese of Munich and Freising are “jointly and severally liable” for “tolerating” the sexual abuse of the plaintiff.

In connection with massive allegations against the emeritus Pope Benedict XVI. Standing priest Peter H. from the diocese of Essen was released from the clergy this year. As part of an ongoing canonical procedure, the Vatican had given H. the legal instruction that, in view of the allegations, he could apply for release from the priesthood himself, the diocese of Essen had announced. H., who was convicted of being a pedophile, made use of this, and in the meantime he has been laicized.

The Bishop of Essen, Franz-Josef Overbeck, had banned the former clergyman from performing priestly services in 2010, but continued to keep him under the supervision of the diocese. In 2020, Overbeck ordered H., who had previously lived in Bavaria, back to the Ruhr diocese in order to be able to control him more closely. According to the diocese, Overbeck warned against laicization in a letter to the Vatican. If H. no longer belongs to the clergy, “these efforts will not be able to be continued to the extent that is happening now.” “I see that with some concern,” Overbeck wrote to the Vatican. The diocese said it was in talks with H. However, this is no longer subject to any ecclesiastical authority to issue directives.

The case of the pedophile cleric led to international criticism of Pope Emeritus Benedict. In a statement he signed on the Munich abuse report, Benedikt denied having attended the meeting on H.’s admission. He later had to correct this statement and blamed his legal advisors for having made a mistake in preparing the opinion.