Russian army is in Ukraine: Lambsdorff sees little danger of an attack on the Baltic States 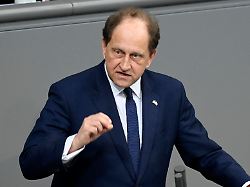 According to FDP foreign politician Lambsdorff, Russia’s saber-rattling, especially with Lithuania, will not lead to an attack on the Baltic States. The Russian armed forces are concentrated in Ukraine. This means that a direct involvement of Germany in the conflict is rather unlikely.

The FDP foreign policy expert Alexander Graf Lambsdorff currently considers the threat to the Baltic EU and NATO countries from Russia to be less than before the start of the attack on Ukraine. “As impossible as that sounds, a very sober analysis reveals that the military resources that are normally concentrated in the western group of Soviet forces are now deployed in Ukraine,” he told RBB station Inforadio.

“In this respect, the probability that our Bundeswehr will be drawn into a direct military confrontation is even lower than usual,” Lambsdorff explained. The background to the debate is Moscow’s open threats against Lithuania over restrictions on freight traffic to the Russian exclave of Kaliningrad.

Kaliningrad is located on the Baltic Sea between Lithuania and Poland and has no direct land connection to Russia. The government in Vilnius announced last week that it would restrict rail traffic between Russia and its exclave. Goods that fall under EU sanctions against Russia, such as metals and building materials, can no longer be brought to Kaliningrad via Lithuania by rail. Moscow described this as a “hostile action” by Lithuania and reserved the right to react, which was initially not described in detail.

Of course, such verbal attacks against a NATO and EU country were worrying, Lambsdorff said. He assumes, however, that it is “propaganda”. “We have to deal with that. It’s precisely intended to create uncertainty.”