S-Bahn accident near Munich: the engine driver is said to have overrun the stop signal 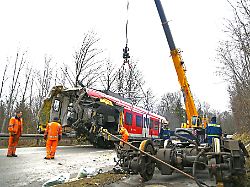 On February 14, two S-Bahn trains collided south of Munich, a young man died and numerous people were injured, some seriously. The engine driver is being investigated – now there are growing indications that he made a mistake.

Four months after the deadly collision between two S-Bahn trains in Schäftlarn near Munich, there are increasing indications that one of the two train drivers made a mistake. According to an interim report by the Federal Office for Railway Accident Investigation, the then 54-year-old is said to have run over a stop signal in February and then overridden the automatic emergency braking. The man, who was seriously injured himself, is being investigated for negligent homicide.

When the two S-Bahn trains collided on the single-track route south of Munich on February 14, a 24-year-old died and numerous people were injured, some of them seriously. At the time, the emergency services had reported 18 injured people who had come to clinics. The document from the federal agency even mentions ten seriously injured and 47 slightly injured.

Driven on despite forced braking

The Federal Office’s paper states that, according to current knowledge, “a work error on the part of the train driver (…) was the primary cause of the train collision in Ebenhausen-Schäftlarn”. First the man drove past a stop signal and then behaved incorrectly: “After receiving an emergency brake from the local train control system (PZB), he did not observe the operational rules and continued the journey illegally in the direction of the single-track section in the direction of Baierbrunn .”

The authority refers to similar cases that have already existed, in particular an accident in August 2014 at Mannheim Central Station. At that time there were four seriously injured and several slightly injured when a freight train and a passenger train collided. The federal accident investigators conclude that the measures taken to date to prevent serious misconduct by railway staff made sense, but were not sufficient.

“It is recommended that processes be developed or improved in the safety management system of the railways with which the effectiveness of compliance with the rules can be effectively checked after a PZB emergency brake has occurred.” The vehicle technology should also be expanded in such a way that train drivers have a reasonable period of time to think and act after such an emergency brake application.

At the beginning of June there was another serious train accident in Garmisch-Partenkirchen in Bavaria. A regional train to Munich had derailed there. Five people died and nearly 70 were injured. The route there has so far remained closed.