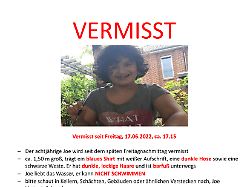 Eight-year-old Joe from Oldenburg has been missing since last Friday. The police are investigating in all directions. New evidence from witnesses raises the suspicion that something bad may have happened to the mentally handicapped boy.

During the day-long search for a missing eight-year-old in Oldenburg, the police also deployed a homicide squad. The police said the boy named Joe could have been the victim of a crime from information provided by a witness. Investigated against unknown. The procedure on behalf of the Oldenburg public prosecutor opens up new possibilities for the authorities. For example, data that would otherwise be lost could be backed up.

At the same time, the search for the boy, who has been missing since last Friday, will continue. The special organization set up for this purpose will remain in place for the time being. So the police work on two tracks, it said. The mentally handicapped boy was last seen at a former barracks site.

In the days since then, police forces, but also volunteers, have searched several districts of Oldenburg, places in the neighboring district of Ammerland, a bathing lake and forests. Tracking dogs and drones were also used. Fire brigades and rescue workers participated. The boy was not found. “Therefore, the original assumption that the child could be deliberately hiding has become increasingly unlikely in the past few days,” the police said.

The population of the Lower Saxony university town takes part in the fate of the missing child. Companies and associations shared the search message. “I hope the little one is found unharmed!” wrote one woman on Twitter. “Just went out again, checked the shed again, everything went off at the house of the neighbors who had moved out,” said another woman.

Police patrols had also searched used clothes containers and parked cars – in case Joe got stuck there. It was determined from the beginning in all conceivable directions, the police said. “In addition to the missing person, an accident or a violent crime was never ruled out.”