Shock at the swimming world championships: the rescuer criticizes the “gazing” assistants 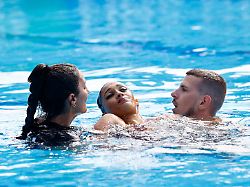 After everyone has digested the drama surrounding drowning US swimmer Anita Alvarez, her coach and rescuer speaks up. Andrea Fuentes railed against the assistants, who first “didn’t react” and then helped wrongly. Alvarez could start again in the team final.

After the dramatic incident involving a US athlete at the swimming world championships in Budapest, a coach of the American team sharply criticized the safety precautions of the competition. Synchronized swimmer Anita Alvarez fell unconscious in the pool on Wednesday immediately after her performance in the free solo freestyle. She was rescued by her trainer Andrea Fuentes and another person. The assistants just “gawped” and “didn’t react,” Fuentes complained in an interview with the Spanish newspaper “AS”.

“When I saw them sink, I looked over to the rescuers, but I saw that they just stared and didn’t react. I thought: ‘You jump in now, don’t you?'” Then she acted. “That’s how I am, I can’t just stare,” said the Spanish-born Fuentes, who was celebrated as a heroine by the media in her home country.

The rescue operation was not easy, she emphasized. The rescuer, who jumped into the pool after a while, “didn’t really help much”. “You had to put her on her side so she wouldn’t swallow water and breathe. He wanted to put her on her back and there was a little absurd fight about which position we should put her in.” Half an hour after the incident, it was announced that Alvarez was doing well. The fainting spell was stress-related and was not the first of its kind.

In any case, Alvarez does not rule out a start in the team final two days after her collapse in the solo free program at the swimming world championships in Budapest. The American will continue to rest, “and then decide with the doctor whether she can swim the team final in the free program or not,” Fuentes said in a statement on Instagram. “The doctors have checked all the vitals and everything is normal: heart rate, oxygen, sugar levels, blood pressure, etc…everything is fine,” Fuentes wrote.

The trainer emphasized that one sometimes forgets that this also happens in other high-performance sports. “Marathon, cycling, cross-country skiing… we’ve all seen images where some athletes don’t make it to the finish line and others help them get there. Our sport is no different than others, except that we’re in a swimming pool Pushing limits and sometimes finding them,” said the trainer and thanked her athlete for the many recovery wishes.