Shock felt from afar: at least 920 dead in earthquake in Afghanistan 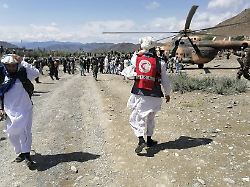 An earthquake in the border area between Afghanistan and Pakistan is said to have killed at least 920 people and injured hundreds more. Deploying rescue workers in the remote mountainous region is difficult.

According to official figures, at least 920 people died in a violent earthquake late Tuesday evening (local time) in the Afghan-Pakistani border region. At least 600 others were injured in the quake in Paktika province, Taliban Deputy State Minister for Disaster Management Maulawi Sharafuddin Muslim said.

The information from regional seismic stations on the strength initially fluctuated. Pakistani authorities gave the quake a magnitude of 6.1. The US earthquake monitor (USGS) reported magnitude 5.9 and a slightly weaker aftershock. Accordingly, the center of the earthquake was around 50 kilometers southwest of the city of Khost near the border with Pakistan at a depth of around ten kilometers.

According to Pakistani information, the tremors were felt in large parts of the country, in the capital Islamabad and even in Lahore in the east of the country. According to the civil protection authority, local emergency services tried to gain access to the affected remote mountainous region. The Pakistani side initially gave no information on damage and casualties.

Earthquakes are not uncommon in Afghanistan and especially in the Hindu Kush mountain range. The damage is often devastating because of the poor structural fabric of many Afghan houses. Added to this is the fact that the humanitarian situation in Afghanistan is catastrophic as a result of the withdrawal of Western troops and the takeover of power by the radical Islamic Taliban last year. There is a shortage of food and medicine.