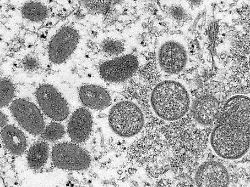 The individual cases of monkeypox have long since become several thousand. One reason could be that the virus is significantly more capable of mutating than previously thought. This is shown by a research team from Portugal.

The causative agent of the current outbreak of monkeypox has mutated surprisingly strongly, according to a study. Compared to related viruses from 2018 and 2019, there are around 50 differences in the genome, writes a research team from Portugal in the journal “Nature Medicine”. This is far more than would have been expected based on previous estimates for this type of pathogen: roughly 6 to 12 times more. The divergent branch could be a sign of accelerated evolution. The work is mainly based on analyzes of Portuguese cases.

So far, experts had spoken of a generally rather slow development with regard to this type of virus – especially compared to the very numerous mutations of Sars-CoV-2. The authors of the study suspect that the current outbreak is due to one or more imports from a country in which the virus is permanently present.

Superspreader events and international travel then seemed to have promoted further spread. “Our data provide additional evidence of ongoing viral evolution and possible adaptation to humans,” writes the team led by João Paulo Gomes from the National Institute of Health Doutor Ricardo Jorge (INSA) in Lisbon.

The number of cases is steadily increasing

Viral evolution expert Richard Neher said the mutation rate was “indeed surprisingly high.” The mutations would have a very specific pattern. The authors suspected that enzymes of the human immune system are responsible for these changes in the genome. “We’re also seeing this accelerated mutation within the current outbreak. The rate is roughly one mutation per genome per month — with some uncertainty,” Neher said. Sars-CoV-2 has about two mutations per genome per month, but this genome is about seven times smaller. However, such comparisons of mutation rates are not very meaningful and say little about the relative evolutionary mutability of the viruses.

When asked whether the mutations made the current spread possible in the first place, the scientist explained that, to his knowledge, there were no indications of this, but it could not be ruled out. Most of the mutations would “probably have no dramatic effects”. As Neher describes, many laboratories have now analyzed the genome of monkeypox cases – most of these sequences belonged to the cluster described in the study.

Around 5,000 cases of monkeypox have been reported in humans worldwide this year. In more than 40 countries outside of Africa, where the disease was practically unknown until May, there were 3,308 cases, according to data from the US health authority CDC as of Wednesday shortly before midnight CEST.