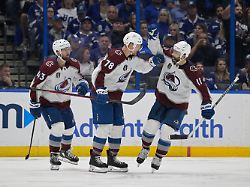 Nico Sturm could be the fifth German to win the Stanley Cup. After the 27-year-old nearly scored a goal himself, the Colorado Avalanche now have three match points. Sturm was traded from Minnesota Wild to Denver just three months ago.

Just one more win – and yet Nico Sturm quickly pushed aside thoughts of the Stanley Cup, which is within reach. “Of course we know it’s 3-1 and we know what it’s about,” admitted the Colorado Avalanche hockey pro. “But we approach every game like we just have to win the game. What In the end it doesn’t matter whether we win a series, a game or a cup.”

The striker’s approach to the hunt for the world’s most important ice hockey trophy is probably spot on. Staying cool even though his team is clearly leading against defending champion Tampa Bay Lightning in the NHL Finals series and has a rendezvous with history. Nothing has been won yet, and Sturm is not yet the fifth German to lift this monster of a trophy into the air. However, on Saturday (2 a.m.) it could be time, in the Ball Arena in Denver, Sturm and Co. have the first of three match balls. The 27-year-old from Augsburg is not entirely innocent of this extremely favorable starting position.

Sturm played a big part in the important 3-2 win in game four. His deflected shot made it 2-2 in the final period and only brought the Avalanche into overtime. At first, Sturm was even awarded the goal before it was credited to Andrew Cogliano. “Somehow the rebound came to me and I somehow tried to get the disc on goal,” reported Sturm. He “didn’t care at all” that he wasn’t considered the official goalscorer after all. When teammate Nazem Kadri then scored the overtime win in the 13th minute, only the moment counted anyway.

Sturm, who was transferred to Denver from Minnesota Wild three months ago, is the eighth German to reach for the Stanley Cup. 26 years after Uwe Krupp, who won the title with Colorado in 1996, he could follow in his footsteps. After Krupp, who was also part of the squad of the victorious Detroit Red Wings in 2002 but was not on the ice in the finals, Dennis Seidenberg was with the Boston Bruins in 2011, Tom Kühnhackl in 2016 and 2017 with the Pittsburgh Penguins and Philipp Grubauer in 2018 with the Washington Capitals successful.

The Avalanche, who defeated the Nashville Predators (4-0), the St. Louis Blues (4-2) and the Edmonton Oilers with Leon Draisaitl (4-0) in the play-offs, are contesting for the third time NHL finals. They won the title in 1996 and 2001 respectively.