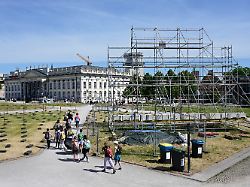 The chairman of the Documenta Forum is resigning after his controversial comments on the suspended work of art at the Documenta. The general director of the exhibition, meanwhile, announces an investigation for “further critical works”. The federal government demands consequences.

After an interview, the Documenta Forum distanced itself from its previous chairman. Jörg Sperling then resigned with immediate effect. In an interview with the German Press Agency, he had previously criticized the fact that Taring Padi’s work of art, which was perceived as anti-Semitic, was taken down at the Kassel art exhibition “due to political pressure”. “A free world has to endure that,” said Sperling. The Documenta Forum “expressly regrets” Sperling’s statements and distanced itself from his statements.

The interview had not been coordinated with the other board members of the association. “These and all other statements in the interview only reflect the personal, unauthorized opinion of Jörg Sperling,” it said. The other members of the board considered “image representations in the manner of the ‘Stürmer’ absolutely unacceptable,” said the forum. According to the Documenta Forum, it is committed “to helping to secure the framework conditions for the Documenta as the international and independent exhibition of contemporary art and to protect the image and reputation of the Documenta”.

Jörg Sperling confirmed his resignation communicated by the forum. “I still stand by what I said,” he said. He personally received a lot of positive feedback. He was “not unhappy” about his departure, just as little as he was about the debate it triggered: “It sharpens the positions.”

Documenta Director General Sabine Schormann announced a systematic examination of the art exhibition for “further critical works”. “Ruangrupa will also have to do justice to its curatorial task,” she told the “Hessische/Niedersächsische Allgemeine”. The Indonesian collective Ruangrupa curates the Documenta Fifteen. The group is now supported by recognized experts such as Meron Mendel from the Anne Frank educational center in Frankfurt. “It is not the task of the management to inspect and approve all works in advance,” said Schormann. “That would contradict the purpose of the Documenta.” It is therefore also not possible to submit the art to an expert committee for approval in advance, for example. This is a core task of the artistic direction.

Minister of State for Culture Claudia Roth called for consequences for the structure of the art exhibition. Basically, the federal government wants more influence on the Documenta. The five-point plan is about processing and consequences. “The Documenta management and the curatorial collective must completely explain how it was possible for a clearly anti-Semitic picture to be hung in the first place,” it says. “They also have to ensure that no other anti-Semitic works are exhibited at the Documenta.”

“The responsibilities between the management and the curators in particular as well as the chairman of the supervisory board and the committees must be clearly clarified and consequences must be drawn from this,” it says. Concrete demands for withdrawal are not made. The withdrawal of the federal government from the supervisory board in 2018 while maintaining federal funding is described as a “serious mistake”. That should change again. “In the future, financial support from the federal government should therefore be linked to direct integration into the structures of the Documenta.”