“Then the hut burns”: Is the gas price hammer coming now? 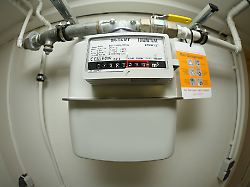 “Then the hut will burn”
Is the gas price hammer coming now?

Gas has already become much more expensive. The price is likely to rise further after Russian supplies were curtailed. Utilities could soon pass these costs on to their customers.

For gas customers, it could soon become much more expensive. Since Federal Minister of Economics Robert Habeck has declared the alarm level in the gas emergency plan, companies and consumers are now threatened with considerable consequences. The situation is currently “tense,” said Habeck. However, security of supply is guaranteed.

The German government has triggered the second escalation level in the emergency plan after Russia severely cut gas supplies to Germany through the Nord Stream 1 Baltic Sea pipeline. Even less gas is likely to flow soon, because the Kremlin-controlled Gazprom group has announced maintenance work on the pipeline for mid-July.

For Germany, these throttling are a problem. Germany still gets 35 percent of its gas from Russia. It is not possible to immediately replace this quantity with imports from other countries. The cuts are also making it more difficult for Russia to ensure that the German gas storage facilities are completely full by the onset of winter. They are currently about 60 percent full.

Gas prices have already skyrocketed as a result of the Russian war of aggression in Ukraine. In July, natural gas to be delivered at the Dutch trading center TTF already costs almost 134 euros per megawatt hour. In the past, long-term contracts with prices between 20 and 30 euros had been concluded.

“We have a problem”

This increase is a challenge for energy suppliers. Because some – including public utilities – have to buy at the current price in order to be able to supply their customers. However, the income from the applicable contracts may be too low to cover the costs from the higher purchase prices. So that they do not get into trouble or even have to go bankrupt because of the steep rise in costs, they are allowed to pass on the additional costs to the customers.

This is made possible by the new paragraph 24 of the Energy Security Act. With the declaration of the alert level, one of the two conditions is fulfilled. The second, however, not yet: The Federal Network Agency must have noticed a “considerable reduction in gas import volumes to Germany”. Only then are companies allowed to raise prices.

It currently looks as if the regulatory authority will not go that far for the time being, despite the throttling. But she fears an insufficient gas supply in winter. “As of today, we have a problem,” said network agency boss Klaus Müller on Tuesday.

And this problem may mean that the network agency will soon give the green light for higher prices. “Price adjustment clauses in end customer contracts should not be activated for the time being,” tweeted economist Jens Südekum. “But it shouldn’t last long. Then the hut will burn.”

Even price guarantee does not protect against additional costs

The law gives suppliers a lot of leeway. They are allowed to raise prices to a “reasonable level”. There is no upper limit to this level, says Thomas Engelke, energy expert at the Federal Association of Consumer Organizations (VZBV). “Private households would then not be protected from extremely high gas prices.” He emphasizes that the regulation would also affect customers who have a so-called price guarantee. So that it goes quickly, the new prices should apply one week after the announcement.

No one can say exactly what additional costs are to be expected. “The prices are already high and we have to be prepared for further increases,” said Habeck. This will affect industrial production and become a major burden for many consumers. According to Engelke, a household with an average annual consumption of 20,000 kilowatt hours of natural gas can already expect annual additional costs of 1,000 to 2,000 euros due to the price increases of the past few months.

“My estimate yesterday – ‘at least a doubling’ of gas prices – was probably too optimistic,” says Südekum, looking at wholesale prices. Some industry experts would assume a factor of between six and ten.

The emergency plan has three levels: The alarm level now declared is the second. Accordingly, there is a disruption in the gas supply or an exceptionally high demand for gas, which leads to a significant deterioration in the gas supply situation. However, the market is still able to handle this disruption or demand. The third would be the emergency level. If this is announced, the network agency decides who will still get gas. Certain consumer groups are protected and should be supplied with gas for as long as possible – including private households and hospitals.