Trouble after being kicked out: Masepin wants to take the Haas team to court 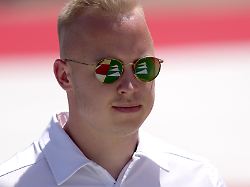 Nikita Masepin drives for Team Haas for a year in Formula 1 – and causes a stir more with risky maneuvers than with class driving. The arrangement ends prematurely as a result of the Russian invasion of Ukraine. The separation now has an aftermath.

Mick Schumacher’s former teammate Nikita Masepin continues to argue with the Formula 1 team Haas after being kicked out. At the time of the separation, the racing team was “in arrears with the salary for this year”, the Russian media quoted the racing driver as saying. The 23-year-old now wants to sue the team. “I didn’t see my money, so we’re going to court,” Masepin said. The man from Moscow had to leave the racing team shortly before the start of the season because of the sanctions against Russia after the invasion of Ukraine.

The EU had put Masepin and his father Dmitri on its extended list of oligarchs and individuals whose assets will be frozen in the EU and who will no longer be allowed to enter. Dmitri Masepin is a co-owner of former Haas title sponsor Uralkali, a mining company. He is said to have close ties to Kremlin chief Vladimir Putin.

Nikita Masepin stressed that the Haas team’s breakup with Uralkali as a sponsor had no impact on his future with the racing team. They were separate contracts. “In my opinion, the employer should at least compensate the salary up to the point of dismissal and probably pay some kind of severance package,” Masepin said.

Haas separated from Masepin and Uralkali with immediate effect at the beginning of March. “Like the rest of the Formula 1 community, the team is shocked and saddened by the invasion of Ukraine and wishes for a quick and peaceful end to the conflict.” it further in the short explanation. After being thrown out, Masepin announced that he was “very disappointed” – and at the same time underlined his hope “that we can all be together again in better times.” It probably won’t come to that anymore.

Haas had replaced Masepin with Denmark’s Kevin Magnussen. The 29-year-old has scored all 15 World Championship points for the team this season and is twelfth in the World Championship. Mick Schumacher is still waiting for his first points in Formula 1.