Ukraine pledge ahead of G7 summit: US pledges $450 million in weapons 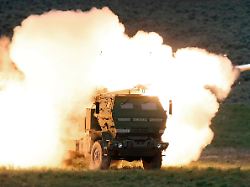 Another $450 million worth of weapons and equipment. The country promises that Ukraine will receive this from the USA. This will include rocket launchers and boats. Before the G7 summit in Germany, there are promises to the war-torn country.

According to its own statements, the USA has promised or already delivered weapons and equipment worth around 6.1 billion US dollars (5.8 billion euros) to the country attacked by Russia in the four months of the war. The US has already supplied four Himars multiple rocket launchers in support of Ukrainian forces. According to US information, four more are now being added.

The mobile systems can fire multiple precision-guided missiles simultaneously at targets up to 80 kilometers away. US President Joe Biden has said the rocket launchers will allow them to hit targets on the battlefield in Ukraine with greater precision. However, this does not encourage or enable the Ukrainian army to strike beyond its borders.

Biden is traveling to the G7 summit this Saturday, which will take place from Sunday to Tuesday at Schloss Elmau in Bavaria. Germany currently chairs the “Group of Seven”. Before the summit, Biden will meet Chancellor Olaf Scholz for bilateral talks. The G7 also includes Canada, Great Britain, France, Italy and Japan.

The G7 countries and other western countries have imposed tough sanctions on Moscow because of the Russian attack. Kirby said one of the goals of the summit was to “further isolate Russia from the global economy, target the Russian arms supply chain, and continue to work against the circumvention of these unprecedented sanctions.” After the G7 meeting, Biden travels to a NATO summit in Madrid. There, too, the Ukraine war will be the focus.